An ingenious and remarkable 17th century naval warrior who saved Korea from Japanese invasions, Yi Sun-shin is still revered and respected by Koreans today as their nation's hero. 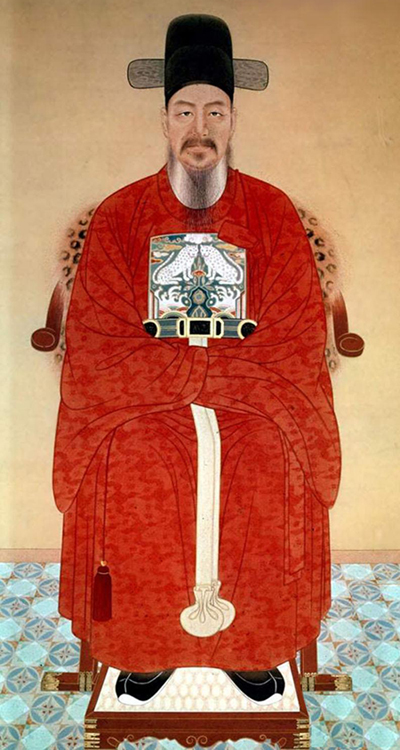 <A portrait of admiral Yi Sun-shin, a 17th century military hero who is still revered by Koreans today.>

Yi Sun-shin, an eternal hero of the Korean people

If you ask any Korean whom they respect the most in their country's history, nine out of ten will choose Yi Sun-shin. Yi Sun-shin was a military hero who rescued Korea from a desperately dangerous situation during two invasions by Japanese general Toyotomi Hideyoshi and who triumphed 23 times without a single loss during naval battles with the Japanese. Even in Japan, the country he defeated centuries ago, Yi Sun-shin is still acknowledged as a god of war. For Koreans, Yi Sun-shin is more than just a historical figure: he lives on in Koreans' hearts as a role model—a "Saintly Hero (seongung)." Even today, novels, movies, television dramas, and plays continue to be inspired by the life of Yi Sun-shin. 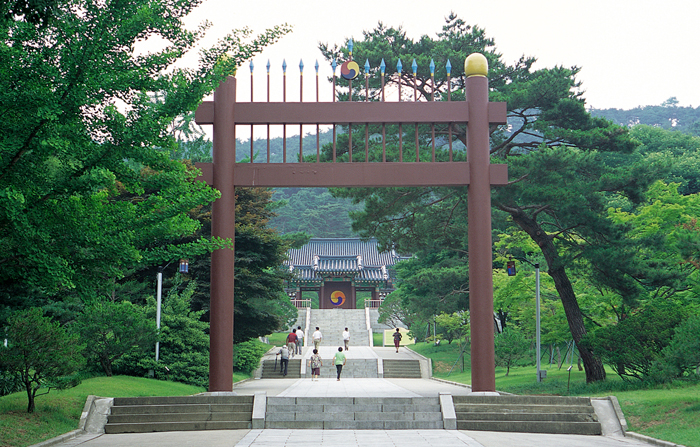 Yi Sun-shin was born in 1545 in Seoul to a poor yangban (ruling class) family. Upon becoming a military officer at the relatively late age of 32, Yi faced a series of difficulties until he reached the rank of suguntongjesa (roughly equivalent to today's naval commander) at the age of 47 due to his upright character and unwillingness to make unjust compromises. Despite being an excellent soldier, he did not draw attention to his military prowess. But when Japanese general Toyotomi Hideyoshi invaded Korea in 1592, and the Joseon Dynasty found itself on the brink of collapse, it was Yi's heroic actions that saved the country from impending doom. During the seven years Korea was consumed by the two Hideyoshi Invasions, Yi never once suffered defeat, emerging victorious in all battles. Thanks to his efforts, the dynasty was saved.

Battle of Hansan Island, one of the world's top four naval battles

Toyotomi Hideyoshi, who had taken control of the Japanese government, attacked Korea in April 1592 as part of his expansion plan to rule Asia by way of defeating the dynasty and eventually conquering Ming China. The plan was thwarted, however, as Yi Sun-shin's fleet defeated Japan's navy in every battle the latter attempted on the Yellow Sea and the Southern Sea. In the Battle of Hansan Island (August 14, 1592), the Korean navy overwhelmingly defeated Japanese naval forces, sinking 59 out of 73 Japanese ships and killing over 9,000 Japanese soldiers. The Battle of Hansan Island played a decisive role in almost completely wiping out the Japanese navy, preventing Japan's original plan of a parallel amphibious attack.

During the Joseon era, naval battle strategies mostly relied on ramming and boarding (hand-to-hand combat on the deck after enemy ships clashed with one another). In this battle, Yi Sun-shin's fleet tried a new approach: the siege-and-annihilation method called "hakikjin (crane wing maneuver)" that had traditionally only been used for land battles. It was a momentous victory that changed the course of naval battle history. By pretending to retreat, Yi lured enemy ships to the wide-open sea of Hansan Island, after which his fleet spread out in the shape of a crane's wing, surrounding the Japanese fleet. Using powerful warship guns, all of the ships in Yi's fleet began shooting the enemy ships at the same time, resulting in the annihilation of the Japanese armada. Together with the Battle of Salamis, the Siege of Calais, and the Battle of Trafalgar, the Battle of Hansan Island is considered one of the world's top four greatest naval battles in history. Centuries later, Admiral Togo of the Japanese navy applied Yi Sun-shin's hakikjin method in the Battle of Tsushima (1905), in which the invincible Russian fleet was similarly destroyed.

<Video clips of KBS's History Special that explain the Battle of Hansan Island and the hakikjin method.>

Five years after the Hideyoshi Invasions, Korea and Japan began truce negotiations as their relationship had entered a peaceful period. However, it was at this time that Japan, having supplemented its battle strategy, made a sudden attack. War hero Yi Sun-shin had been divested of his official rank due to jealousy within the court and was fighting as a commoner, while the fleet led by his rival General Won Gyun had been fatally destroyed. With total defeat again so very close at hand, the only individual that the king and nobility of the Joseon Dynasty could count on was—again—Yi Sun-shin.

Upon being summoned, Yi told the trembling king, "I still have 12 ships under my command." With only 12 ships, Yi Sun-shin headed for the site of the Battle of Myeongnyang (today, the seas off the coast of Jindo Island). The Myeongnyang Strait is also called "Uldolmok," which means the "strait where stones cry." The name references the tidal currents in this area, which are so strong that stones can be heard rolling around on the sea floor, a fact that remains true today. After blocking the only available escape route with chains, Yi Sun-shin gathered his soldiers together and said these famous words:"Those willing to die will live, and those willing to live will die." 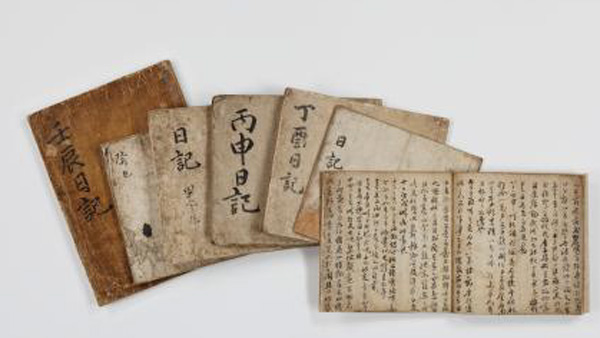 <Nanjung Ilgi: War Diary of Admiral Yi Sun-shin is a UNESCO World Heritage that Yi wrote during the seven years of the Hideyoshi Invasions. The famous quote, "Those willing to die will live, and those willing to live will die," is from Nanjung Ilgi.>

On the day of battle, Yi Sun-shin headed out to meet the enemy fleet with his 12 ships. The Japanese had arrived with 133 large battleships. Yi immediately gave the retreat command and lured the Japanese ships to the Myeongnyang Strait. After the entire Japanese fleet had entered the strait, Yi raised the chains that he had already set in place. With the Japanese ships hopelessly entangled in the chains, Yi's 12 retreating ships turned around in the direction of the Japanese ships. While Yi's 12 ships opened fire, Japan's 133 ships frantically tried to escape, only to fail in their attempts due to rapid tidal currents and Yi's strategically placed chains. 31 of Japan's ships sank. With countless soldiers killed in battle, Japan was forced to retreat but not a single ship in Yi's fleet was damaged. Only two of Yi's soldiers were wounded and incredibly only two died. This battle ended in a remarkable victory that remains unparalleled in world naval history. It played a major role in returning to Korea the upper hand in battle and eventually brought seven years of war to a close. 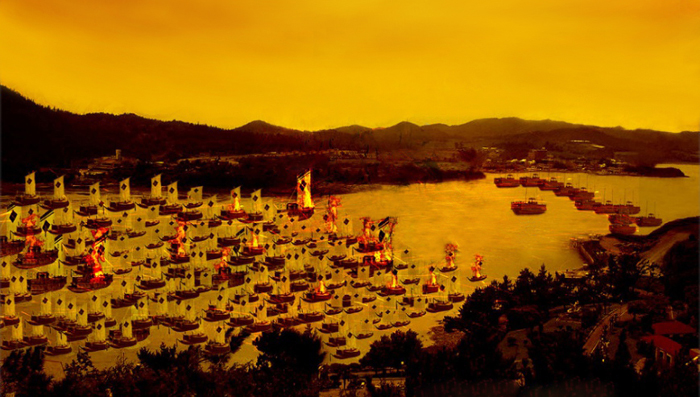 <A painting of the Battle of Myeongnyang, which used a naval military strategy that remains revered in world naval battle history.>

With its utilization of geography, the tides, and intelligent battle strategies in the face of incredible odds to defeat the enemy, the Battle of Myeongnyang is evaluated as one of the top five naval battles of the world and is mentioned in textbooks on naval strategy in naval academies around the globe. 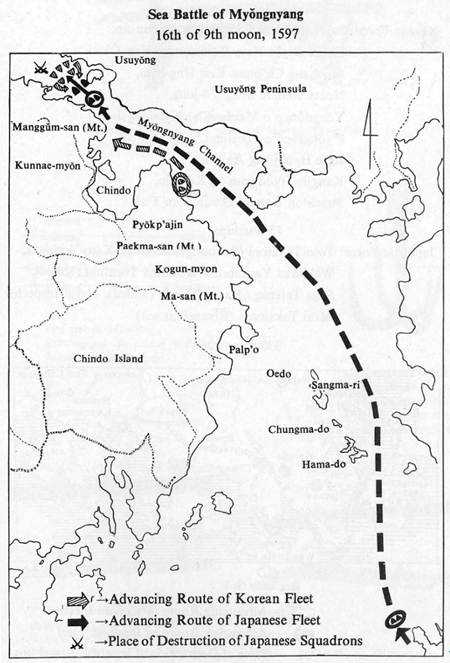 <A diagram explaining the strategy of the Battle of Myeongnyang in a foreign textbook.> 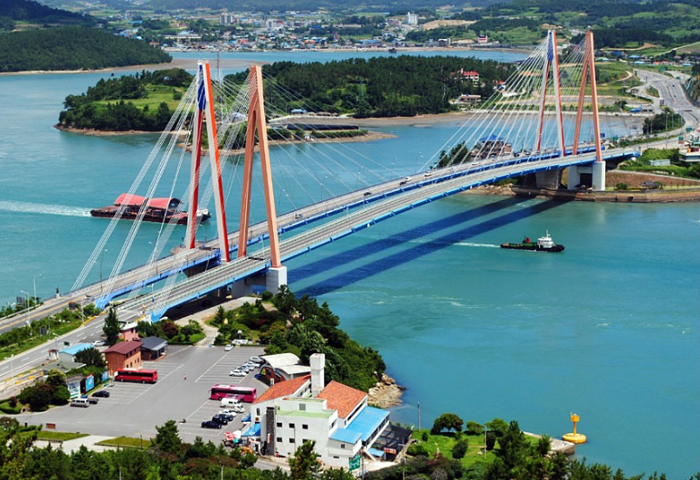 In 1904, the Russo-Japanese War broke out. It was a battle that resulted from the conflict over China between Russia and Japan. In 1905, Japan's Admiral Togo Heihachiro brought the war to an end in victory for the Japanese. After the war, a party was held to celebrate Japan's victory. At the party, a reporter asked Admiral Togo: REPORTER: Admiral, would you compare yourself with England's Admiral Nelson, who destroyed Napoleon's fleet? ADMIRAL TOGO: Am I so worthless as to be compared to Admiral Nelson? I destroyed the Russian Baltic fleet, the strongest navy in the world, with only one-third the number of ships in Nelson's fleet. REPORTER: Pardon my error. You are an even greater naval general than Admiral Yi Sun-shin of Korea. ADMIRAL TOGO: It may be proper to compare me with Nelson, but not with Korea's Yi Sun-shin, for he has no equal. Nelson and I both fought battles with full support from the government, but General Yi Sun-shin achieved victory without any government support. Compared to General Yi, I am but a petty officer.

All countries have their own heroes, and for Korea, it is Yi Sun-shin. If you visit Sejong-ro in Seoul's Gwanghwamun area, you will see a statue of Yi Sun-shin with a large sword at his side, still watching over the Korean people. 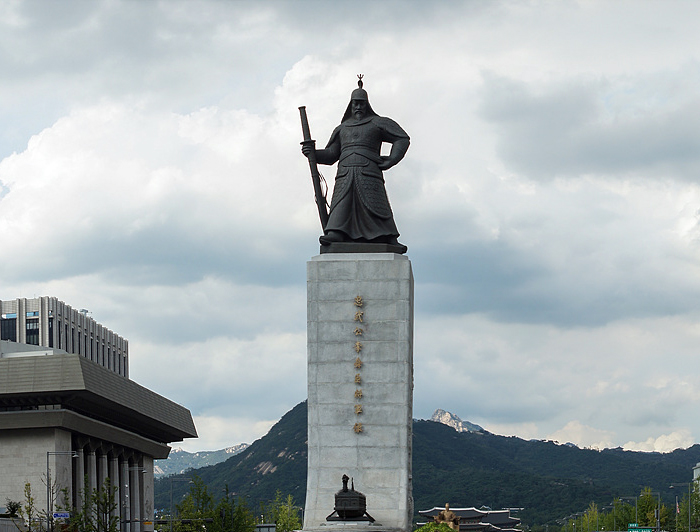 <A statue of General Yi Sun-shin in Gwanghwamun Square, located in central Seoul.>