Buddhist Temple Bell – the magnificent unification of science and art

The Buddhist temple bell encapsulates both the science of sound and the art of beautiful design and form, allowing the heart to open in its grandeur.

Korean Buddhist temple bells (beomjong) are a symbol of Korean Buddhism and a national art treasure. Read the history. 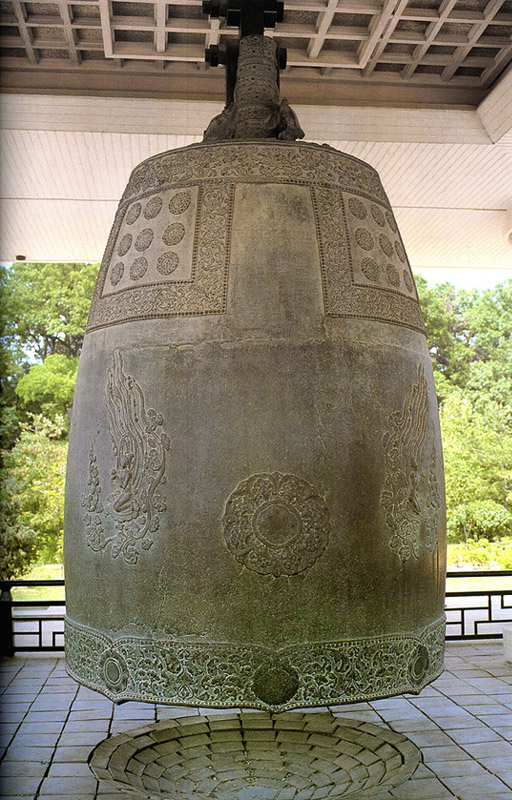 28 bells toll at dawn to bring light to the darkness of human existence.

Against the darkness of early dawn, when the world is still asleep, the sound of ringing bells resonates deep within the mountains. This sound, which awakens humans from sleep, brightens the darkness, reverberates as far as the horizon and seeps into the Earth as deep as hell itself, announces that to dispel a lifetime of pain and agony and travel the path of enlightenment, one only needs to empty and open the heart. The solemn yet distinct, clear sound of the Buddhist temple bell's lingering ring brings a sense of momentary peace to the body and mind burdened by worldly concerns, allowing one to repent and open the heart. There is also the belief that hearing the temple bell ring brings salvation to those who are suffering in hell by bringing them back to paradise. Because of the various meanings associated with it, the Buddhist temple bell of Korea has been one of the most important tools of Buddhist ritual since early times.

In repeatedly breaking the surface of one's greed and rage that is as strong as cast iron, one comes to recognize the deep and clear resonance of enlightenment from deep within the emptiness of the heart. This is what the sound of the Buddhist temple bell signifies, and the reason why it rings without fail each dawn.

Lingering yet clear and deep sound

The temple bell of Korea, called "beomjong" in Korean, is so unique that it has been given its own classification ("Korean bell") in the field of acoustic science. The most prominent feature of the Korean temple bell is its enduring, elegant shape, which allows the subtle yet clear bell ring to be heard several kilometers away as a "woong-woong-woong" sound that repeats like it will break off at any moment and yet lingers on. The long sound is caused by the undulation phenomenon, in which the bell's vibrations create two simultaneous strong and weak sounds that intermingle and repeat, enabling the ringing to travel long distances. How is this even possible? Detailed scientific analyses have revealed that the cause is the differing thicknesses of the bell's top, middle, and bottom. However, it is not easy to calculate the thickness ratio of the bell for which the undulating phenomenon becomes possible, even with modern scientific tools. It remains a mystery how Koreans 1,000 years ago were able to find this out for themselves.

The oldest surviving temple bell in Korea today is the bronze bell of Sangwonsa Temple, located deep inside Odaesan Mountain. According to its inscription, the bell was created in the year 725 A.D. (the 24th year of King Seongdeok) in the early Unified Silla Period, and is a classic example of the Korean Buddhist temple bell. 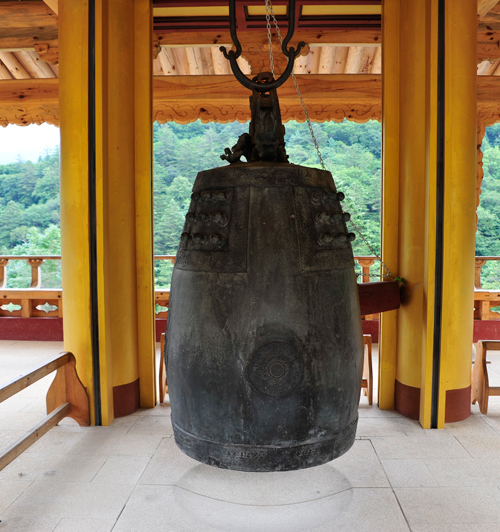 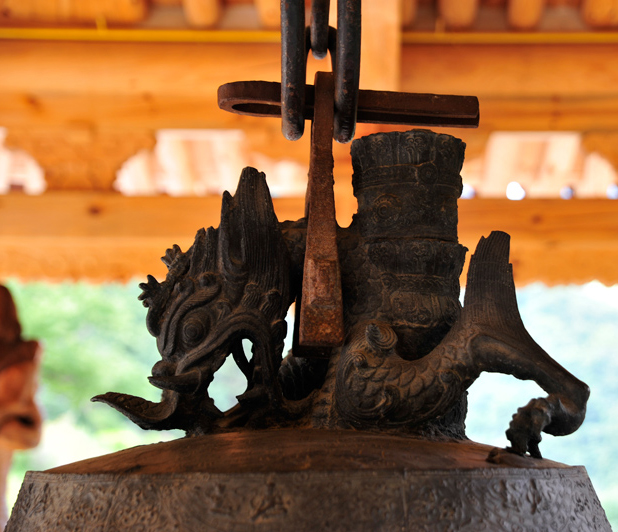 <The bronze bell of Sangwonsa Temple, considered to be the archetype of Korean Buddhist temple bells, is the oldest and most beautiful surviving temple bell in Korea.> 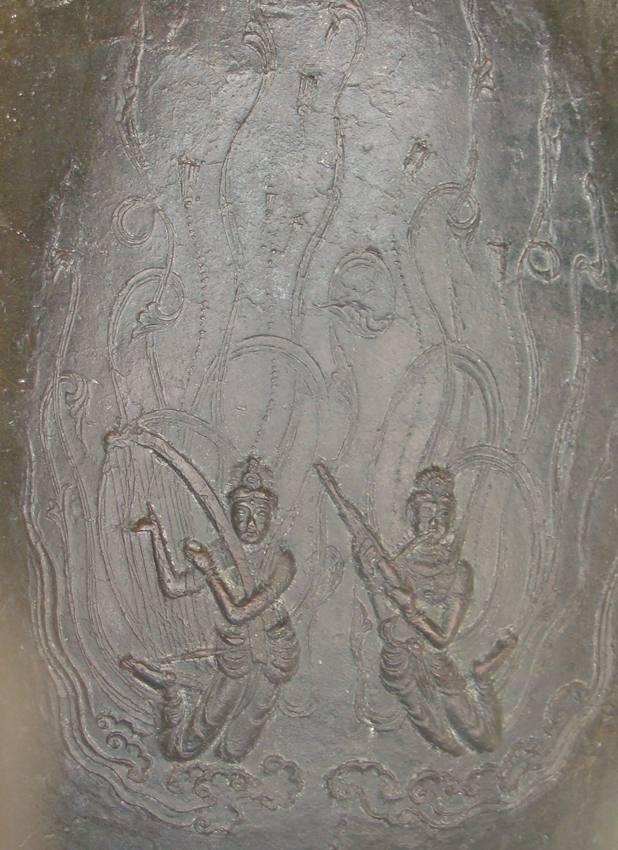 <On the body of the bronze bell of Sangwonsa Temple is an engraved fairy from heaven playing a musical instrument.>

Together with their deep and clear sounds, Korean temple bells have slender and flowing shapes and are adorned with beautiful, delicate designs. While the designs on temple bells in China and Japan usually include double-headed dragons, Korean bells are often engraved with one dragon bent at the waist in a lifelike posture. It acts as the hook on which the bell is hung. Even more unique is the body of the bell, which is shaped like a thick bamboo rod. This shape is found only in Korean temple bells, and its origin and function are still unknown to scholars. The shoulder and mouth of the bell are decorated with a vine design, with the bell's shoulder covered with four square designs that each has nine circular points, totaling 36 in all. On the body of the bell is a spot called the "dangjwa" that is hit in order to make it ring. The dangjwa usually consists of a highly detailed and beautiful design depicting a fairy rising to heaven. 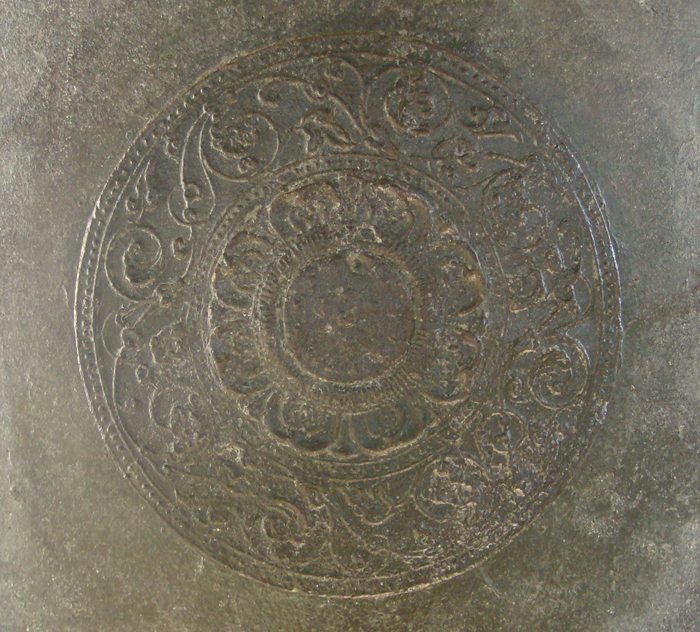 <Dangjwa, the spot on the bronze bell that is struck with the bell hammer.>

The largest surviving temple bell in Korea is the Sinjong of King Seongdeok, today housed in Gyeongju National Museum. According to its inscription, 156,000 pounds of copper were used to make it. This extremely large and extraordinarily made bell – reaching a height of 3.75 meters – was commissioned by King Seongdeok of Silla to honor his father's memory, and was completed in 771 A.D. during the reign of King Hyegong. The Sinjong of King Seongdeok is also called the Emile bell, a name based on a macabre legend that a human baby was embedded into the bell's material. It is so striking and regal that one German scholar is said to have exclaimed upon seeing the bell that if there were such an artifact in Germany, he would not hesitate to build a separate museum for it.

<At a height of 3.75 meters, a mouth diameter of 2.27 meters, and a thickness of between 11 and 25 centimeters, the 18.9-ton Sinjong of King Seongdeok is the largest surviving temple bell in Korea.> 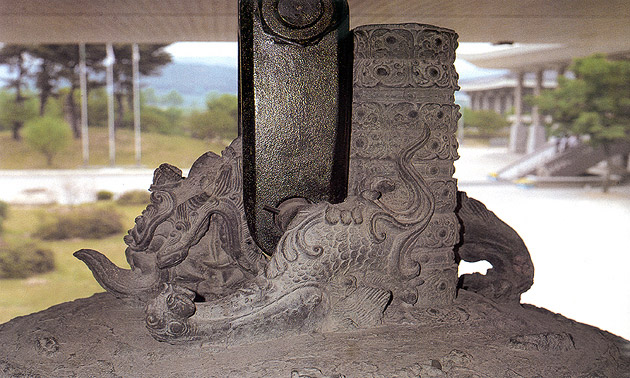 <Dragon design at the top of the Sinjong of King Seongdeok.> 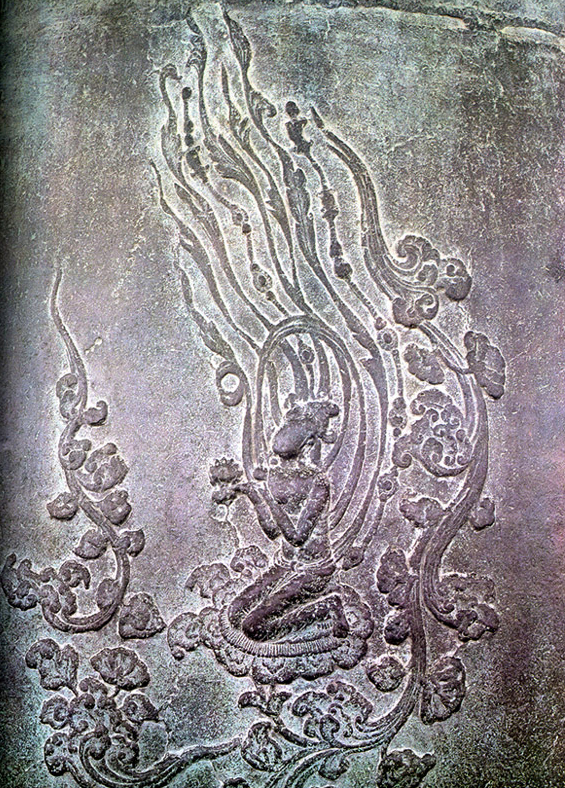 Korean Buddhist temple bells (beomjong) are a symbol of Korean Buddhism and a national art treasure. Read the history.