Buddhist Temples of Korea – the land of the Buddha

Buddhist temples in Korea embody the peace and equanimity of the Buddha while being artistic masterpieces of splendor and wonder. 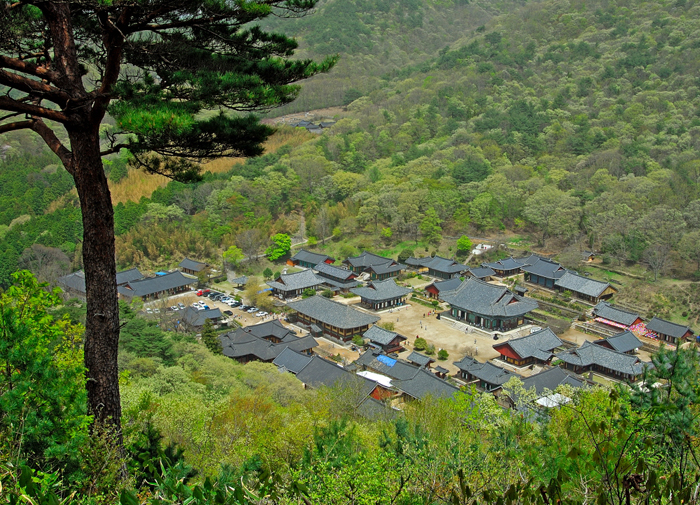 <Songgwangsa Temple is located on Jogyesan in Suncheon, Jeollanamdo Province.>

Korea, a country with a temple on every mountain

Korea is a country of many mountains. Seventy percent of its land is mountainous, and it has over 5,000 mountain peaks. Most of those mountains are home to Buddhist temples; indeed, one can easily find a temple on a visit to any stream on any mountain. Each of these temples has its own history, legends and origin. There are over 20,000 officially registered temples in Korea, with many – hundreds in fact – at least 1,000 years old. These include UNESCO cultural heritage sites like Bulguksa Temple and Seokguram Grotto as well as Haeinsa Temple, Tongdosa Temple and Hwaeomsa Temple. Therefore, it is no exaggeration to describe Korea as a land of temples. A true understanding of Korean history, culture and art should begin with an understanding of the significance of the Buddhist temple in Korea. 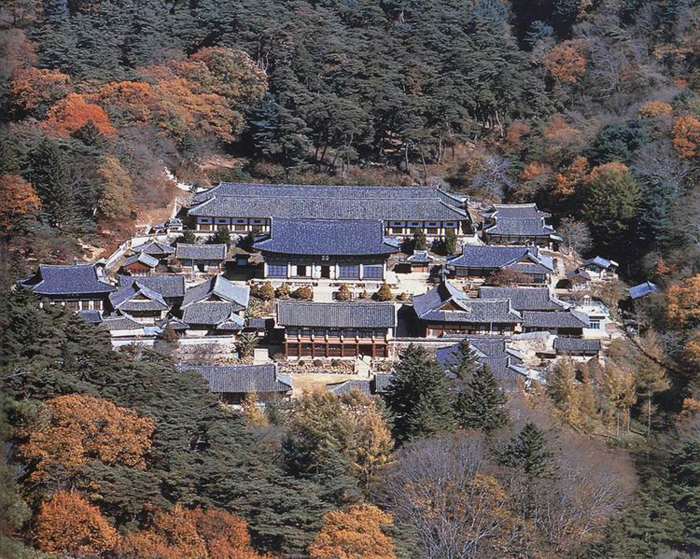 <Haeinsa Temple is located on Gayasan Mountain. It is considered one of the top sights for visitors to Korea.>

The temple, a museum of Buddhist art

The temple, which is called sachal, sawon or garam in Korean, is a place where Buddhist monks undergo religious training and officiate religious rituals for Buddhist worshippers. A temple is considered the land of Buddha, and therefore different from the human world. As such, the temple is highly ornate, majestic and beautiful. Each building—from the main building that houses the statue of Buddha to other more minor ones—is an architectural masterpiece in its own right, with pillars, roof, walls and doors crafted by the best artists of the day. The temple is also a museum of various forms of Buddhist art, like Buddha statues, pagodas, bells and Buddhist paintings. The Buddhist temples in Korea have comparable historical significance and artistic value with the old cathedrals of Europe or with Islamic mosques.

<An octagonal nine-level stone pagoda built in the 10th century and a medicine Buddha statue stand in front of the main Buddha hall at Woljeongsa Temple in Pyeongchang, Gangwon Province.> 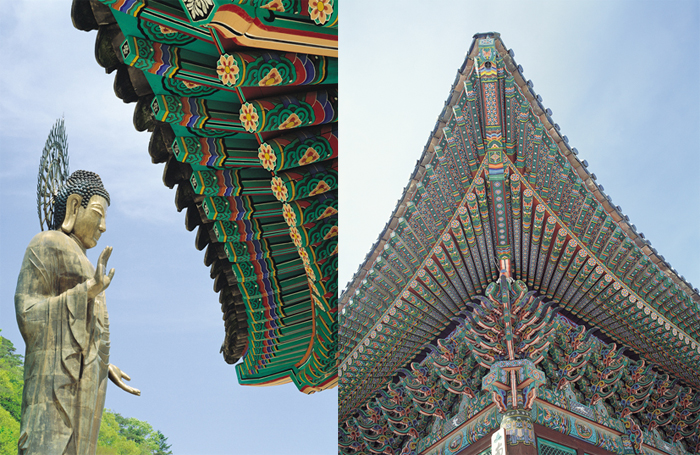 Though temples differ somewhat based on their size and date of construction, they generally adhere to the same basic architectural principles. A temple begins with a long pillar called the danggan jiju, which serves as a milestone that shows that this is a place in the presence of Buddha's spirit. 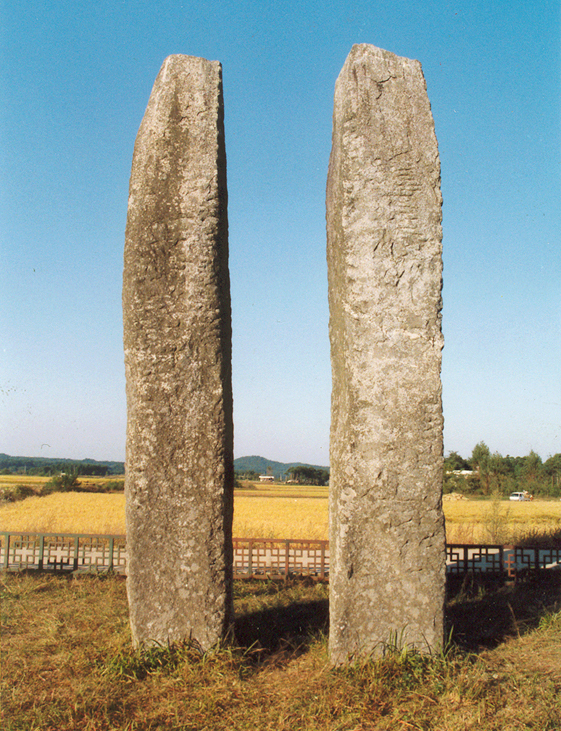 After passing the danggan jiju, one comes upon the Iljumun gate. The word "Ilju" means "one's mind" or "cosmic consciousness." In other words, it is a symbol of the origin of the universe and life and the boundary between the human world and paradise (the land of Buddha). After passing through the Iljumun gate and going slightly further up the mountain, one usually comes upon a small stream. This is a message to the visitor that one should cleanse oneself of all the worldly cares of one's body and mind in the waters of the stream before entering the presence of Buddha. 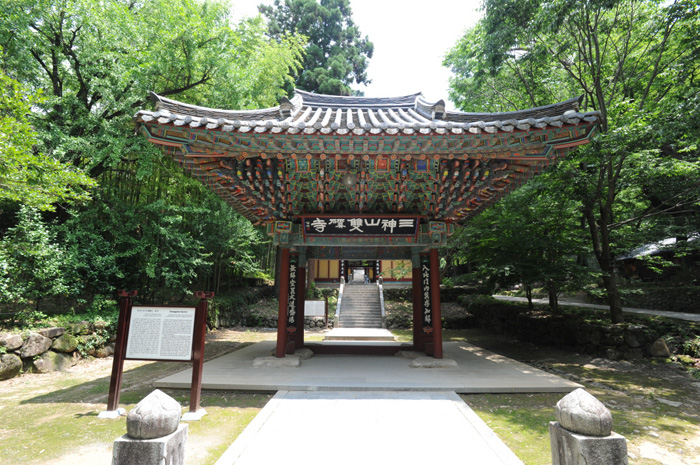 After passing the cleansing stream, another gate appears that is guarded by the four devas, or gods, who protect Buddha. It is here where judgment is passed on whether one is worthy of meeting the Buddha. A closer look at the devas shows that their faces resemble Central Asians, their armor is Chinese, and that they hold in their hands Korean swords—communicating the colorful trans-cultural journey of Buddhism from India across the Silk Road to Korea.

After passing safely through the gate of devas, the last gate is the Bulimun, which leads into the courtyard of the main temple building where the Buddha resides. Bulimun means "not two" in Korean, which can be interpreted as "just as you and I are not two separate beings, neither is the universe separate from myself. Therefore, the Buddha and I are one." This should be kept in mind as one crosses through the Bulimun toward the main building that enshrines the Buddha statue. 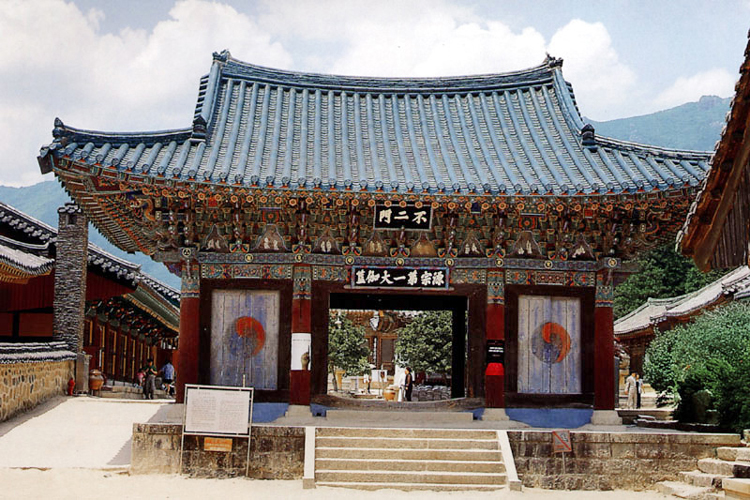 The journey one takes to reach the temple—discovering the danggan jiju from afar, washing away one's worldly cares in the stream after passing the Iljumun gate, and meeting Buddha inside the main temple building after passing the gate of devas and receiving enlightenment at Bulimun—can be considered the path of mental training that led to the Buddha's enlightenment. 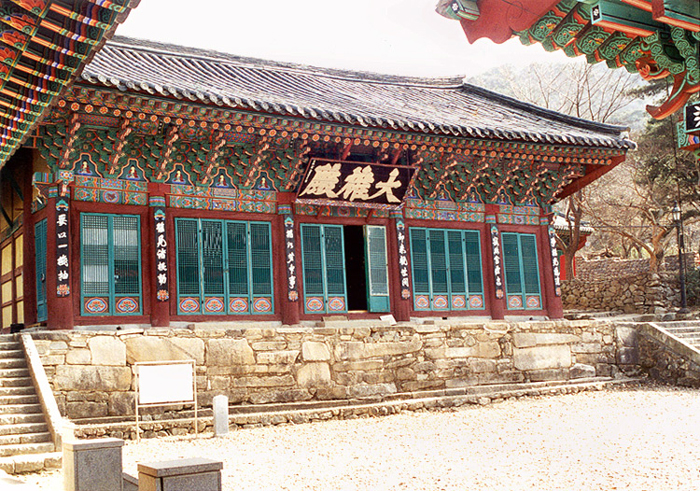 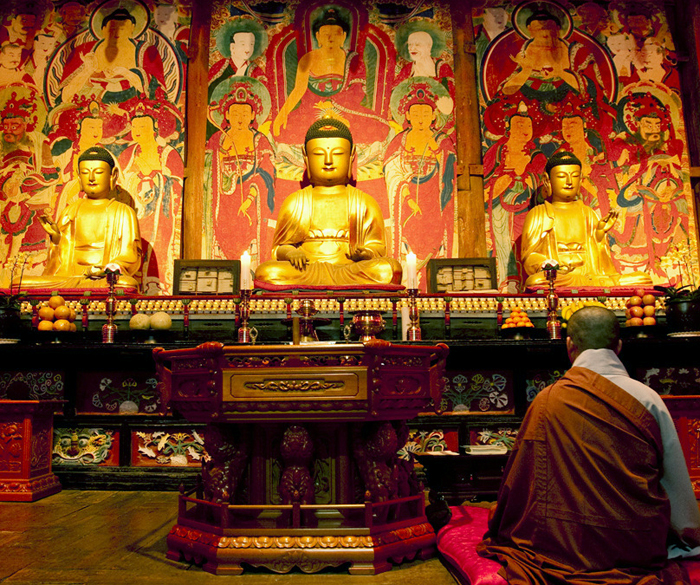 A temple's visual beauty and the significance of its many features naturally inspire many visitors to experience Buddhism more deeply. Temple stays are available for those who wish to spend several days with temple monks in meditation and mental training, an experience that certainly helps to free the mind of its worries and give a taste of enlightenment. The Korean Buddhist temple is a training center that is open to all.