Used by Admiral Yi Sun-shin during the Hideyoshi Invasions in the 16th century, these innovative warships were instrumental in effectively defeating the Japanese invaders. 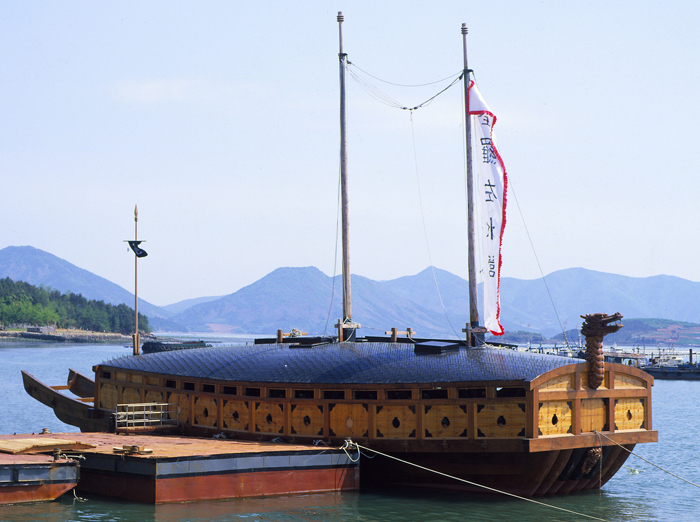 <A "turtle ship" that has been restored to its actual size.>

Who made the "turtle ship"?

Admiral Yi Sun-shin is revered in Korean history for his heroic actions in rescuing his country from near ruin during the Hideyoshi Invasions, a two-part international war that began with an attack by Japan in 1592 and lasted for seven years until a combined maneuver by the Joseon and Ming dynasties defeated the Japanese. During this time, Admiral Yi Sun-shin was victorious in all the battles against the Japanese invaders, an unprecedented feat in world naval battle history. Yi's battle strategies are still famous enough to be published in the modern naval academy textbooks of the United States, the United Kingdom, and Japan. 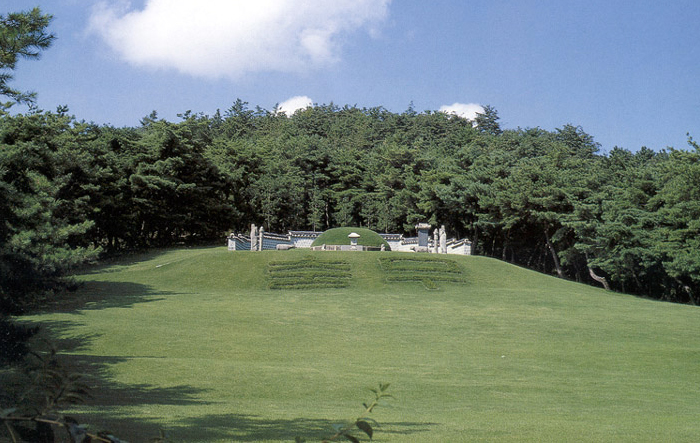 <The grave of Admiral Yi Sun-shin, the most revered hero in Korea's history. Yi saved the country from ruin by advancing "turtle ship" technology.>

It is impossible to think of Yi Sun-shin without also thinking of the "turtle ship." In front of the statue of Yi Sun-shin in Seoul's Gwanghwamun Square, there is also a statue of the "turtle ship" (also called "geobukseon" in Korean). The "turtle ship" is widely believed to have been invented by Yi, but this is actually not the case—the "turtle ship" had already been in existence long beforehand. During 9th century in the Silla Dynasty, Jang Bogo developed a unique battle ship that involved covering the top with a protective shell while at Cheonghaejin (a military base in Wando, South Jeolla Province), which dominated the seas of East Asia at the time. The ship was not only fast but also effectively blocked attacks by sword and spear almost exactly like Yi's "turtle ship." The actual "turtle ship" as we know it today was developed during the late Goryeo Dynasty (918-1392 A.D.). There are also records from the reigns of King Taejong and Sejong of the Joseon Dynasty between the 14 and 15th centuries about the "turtle ship." The annals of King Taejong state that "while crossing the Imjin River, the king witnessed a skirmish between a turtle-shaped boat and a wa (Japanese) boat." Technically speaking, Yi Sun-shin was not the inventor of the "turtle ship," but rather the first to develop the technology that allowed it to be used effectively and extensively in actual combat. Yi adapted the existing "turtle boat" format by placing an iron plate over it and supplementing several other functions so that the ship could be equipped with cannons.

Was the "turtle ship" really the world's first armored battleship?

The question of whether the "turtle ship" was really an armored battleship was first raised in the 1880s and remains unsolved today. The affirmative argument is mostly asserted by Western scholars based on Japanese records. There are many Japanese documents from the Imjin Invasions that note "the enemy (Joseon) has ships that are covered in iron that we cannot break with our cannons." In the June 1899 issue of Harper's New Monthly Magazine, American missionary Homer Hulbert calls the "turtle ship" (geobukseon) a "turtle boat (geobukbae)," and introduces its structure as being covered in iron plates, noting Korea as being the first country in the world to develop metal plate technology together with the iron-plated ship. The fourteenth edition of the Encyclopedia Britannica of 1929 describes the "turtle boat" as the world's first armored battleship.

<A painting of the geobukseon and panokseon (super-structured war ship) discovered in Japan in the 1790s.>

However, there is no mention of the term "armored battleship" in Joseon Dynasty documents during the Hideyoshi Invasions, in Yi's personal records or in the writings of his associates. In his description of the "turtle ship" to the king, Admiral Yi describes it as having "awls planted on its back" as the boat was covered with a board and then awls were inserted into it. Judging from the fact that the awls were planted into the board, it seems to have been made out of wood rather than iron. Because a soaking-wet five-ton mat was placed on top of the board covered with sharp iron spears, the ship was able to withstand even fire attacks. It was this cover that the Japanese navy seems to have mistakenly thought was iron. 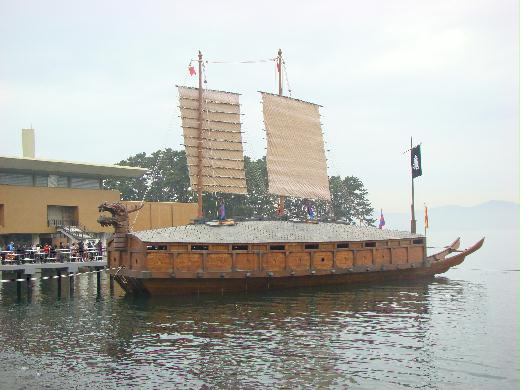 <A restored "turtle ship" in the waters in front of the Korean Naval Academy.>

According to historical records, the turtle ship is constructed by placing a wooden plate over the panokseon, the ship traditionally used by the Joseon navy, implanting this plate with tightly-planted rows of iron awls, covering it with a massive wet mat, and drilling holes in both sides for shooting cannons. However, there is still the possibility that the roof was partially or entirely covered with iron—but we cannot know for sure until an actual turtle ship from that time is discovered. 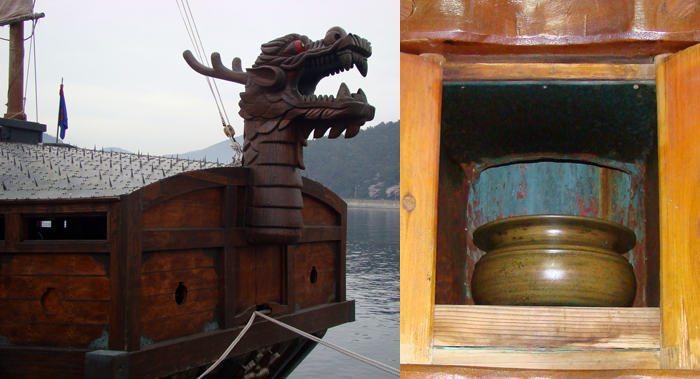 <A restored dragon's head at the front of the "turtle ship" (left). An incense burner that sends flames out through the dragon's head (right).> 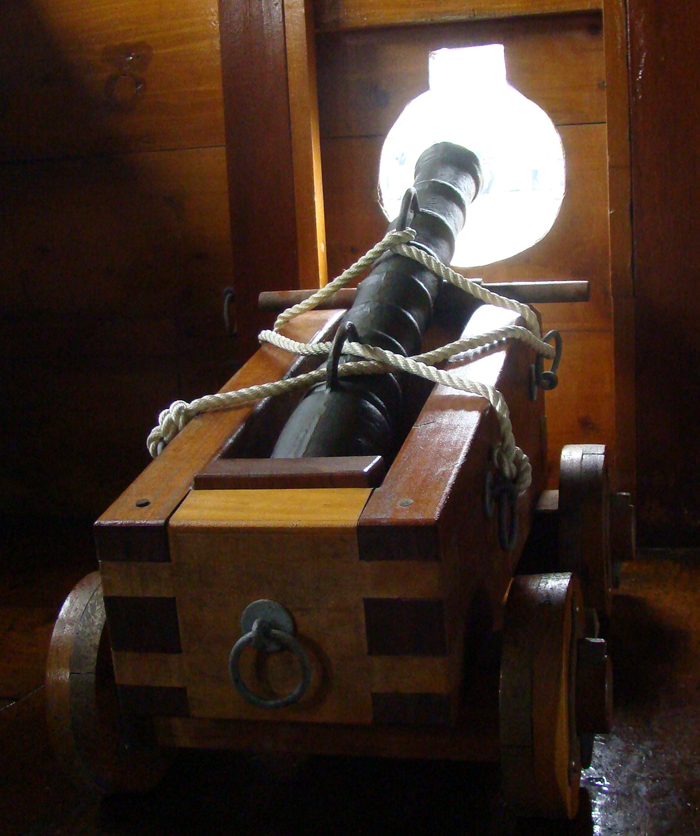 <A cannon inside the "turtle ship.".> 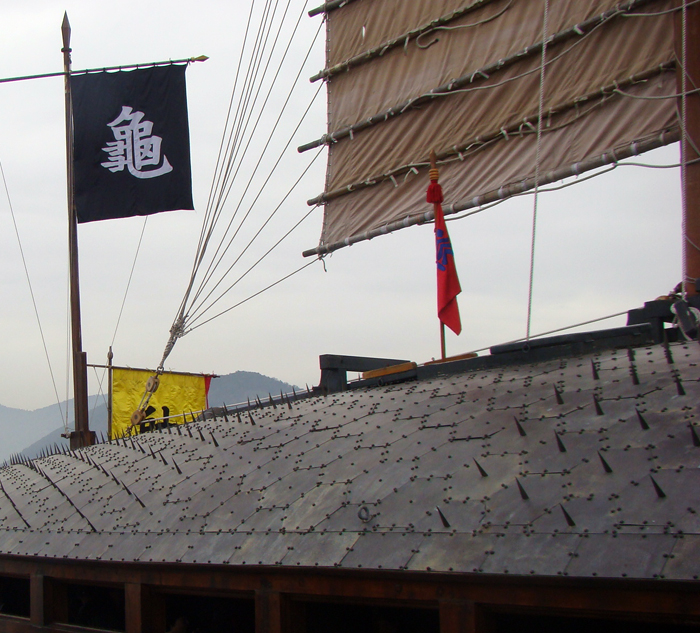 <The iron "tortoise shell" of Geobukseon that invoked fear in countless Japanese soldiers.>

Why did the turtle ship disappear? 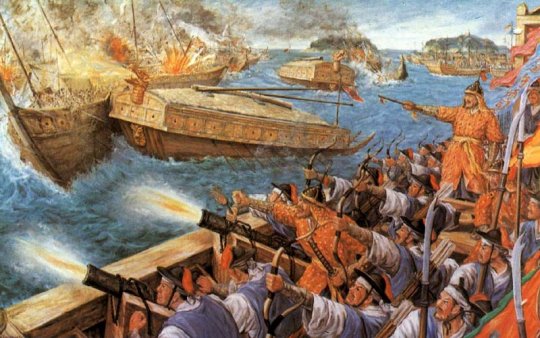 <A painting depicting the "turtle ship," the battleship that confronted enemy ships head on, in battle.>

After the seven-year Hideyoshi Invasions, the "turtle ship" lost its symbolic value. For a time, maintenance of "turtle ships" seems to not have had high priority. With an increase in national defense requirements and the reorganization of the navy, the need to reestablish "turtle ship" and warship standards was voiced. However, without a corresponding increase in troops, operation of "turtle ships" became increasingly difficult. Maintained only as a formality, knowledge about the functions and the strategic value of the turtle ship gradually faded in the national consciousness. There are records by a foreign missionary in the late 1880s of having seen remains of a turtle ship, but these are not entirely credible. All that is left to us today are recollections of the majesty of the turtle ship and the heroic deeds of Admiral Yi Sun-shin.

Yi Sun-shin described the battle with Geobukseon in his report to the king. "With the initial attack by the turtle ship and the following attack by the panokseon, we repeatedly shot cannons. When we shot cannons, arrows and threw stones like hail upon our enemy, their fighting spirit was easily broken and they dropped dead in the water like flies. This made sea battles very easy."