These wondrous, beautiful structures that are said to contain the remains of Buddha's body exemplify the strength and permanence of the Buddhist religion. 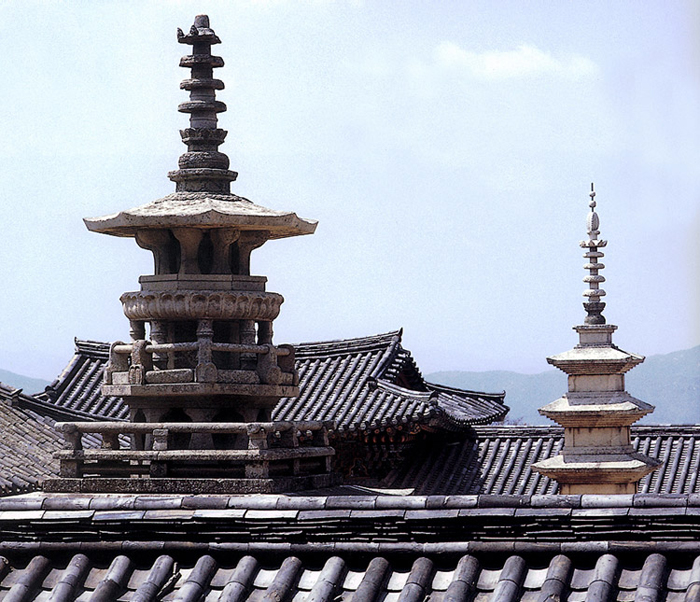 <Dabotap and the three-story pagoda, Seokgatap, at Bulguksa Temple in Gyeongju.>

A pagoda (called "tap" in Korean) is considered the grave of Buddha and is a structure commonly found at Buddhist temples. The pagoda was first built to preserve the sari (parts of the body) that remained after Sakyamuni Buddha's cremation and his reaching of nirvana. With the passing of time, the pagoda gradually changed in function from being the storage place of Buddha's actual body parts to a statue believed to be symbolic of Buddha and a site of worship. The first pagoda built in India was created like a semi-spherical tomb. In subsequent eras, a flat pavement called a stylobate was added to the base for support and a sangryun (a long cylindrical metal ornament) was added to the pagoda's top. A stone railing was added to encircle the structure with beautiful sculpted designs, resulting in the pagoda shape most familiar today. When Buddhism entered China, the Indian-style semi-spherical tomb format was replaced with a pagoda in the shape of a wooden pavilion. The wooden pagoda design then migrated to Korea and remained highly popular during the Three Kingdoms Period. After the 8th century, the stone pagoda became widespread. 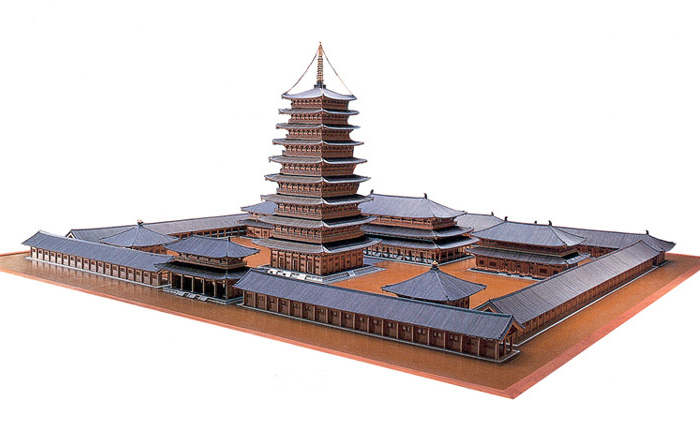 <A recreation of the nine-story wooden pagoda at Hwangnyongsa Temple. Built during the reign of King Jinheung of Silla during the 6th century, it burned to the ground during the Mongol invasion of the Goryeo Dynasty (1238 A.D.).> 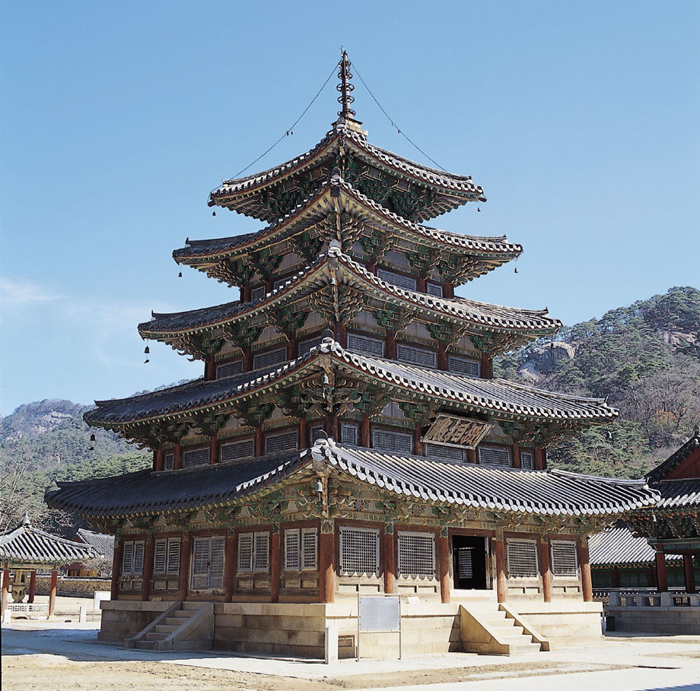 <Palsangjeon (Hall of Eight Pictures): a five-story wooden pagoda from the Joseon Dynasty (1605 A.D.) at Beopjusa Temple. It is the only remaining wooden pagoda in Korea that contains the "Palsang", the series of painted murals depicting the eight stages in the life of Sakyamuni Buddha.>

Korea: The land of stone pagodas

Having undergone a highly complex development process from India through Central Asia to China, there is no easy explanation for the history of the Korean pagoda. Compared to the brick pagoda of China and the wooden pagoda of Japan, Korea used its plentiful supply of high-quality granite stone as the primary material for its pagodas. There are currently over 1,000 registered pagodas in Korea. Among them, Seokgatap and Dabotap on the grounds of Bulguksa Temple are the most renowned and accompanied by one of the saddest legends.

Asadal was an outstanding stonemason of Baekje who was brought to Silla to build Dabotap and Seokgatap. After several years with no news of her husband, Asadal's young wife went to Seorabeol to find him. However, she was prevented from entering Bulguksa Temple due to the rule that women were not allowed inside until the pagodas were finished. Feeling sorry for the woman wandering the temple surroundings, one monk told Asadal's wife that she would be able to see the pagoda's shadow in the pond once it was completed. However, there was no shadow visible on the pond's surface. Upon hearing rumors that Asadal intended to marry a Silla princess, his wife threw herself into the pond and drowned. By the time Asadal reached the pond after completing the pagoda, his wife was already dead. In tears, Asadal engraved an image of his wife onto a rock before returning home to Baekje. Afterward, Seokgatap was named the "Shadowless Pagoda" because its shadow was not visible on the pond, while the pond in which Asadal's wife drowned herself was named "Shadow Pond." 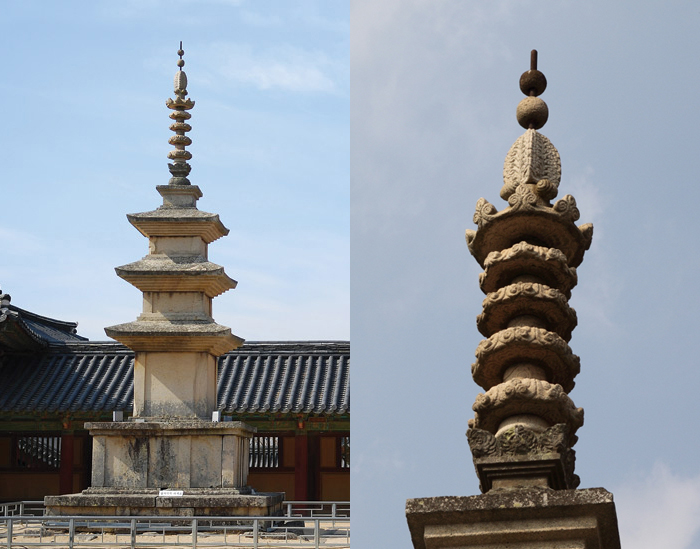 <Seokgatap, which is located at the western end of the courtyard of the Bulguksa's main building, and its sangryun.>

Seokgatap: The prototype of Korean pagodas and the pure realization of Buddhist ideals

Dabotap and Seokgatap were both built to praise Buddha in accordance with Buddhist scripture. The story goes that Dabo, a Buddha who had already achieved enlightenment, rose up in the form of the pagoda in order to praise Sakyamuni Buddha's sermon on the Lotus Sutra. After remaining in mid-air to praise Sakyamuni, the two Buddhas sat alongside each other in the pagoda.

Seokgatap, which was completed in the first year of Silla's King Gyeongdeok (742 A.D.), is an ordinary stone pagoda which consists of two stories of stylobate, which support the three-story pagoda body and the sangryun at its top. The pagoda is 10.4 meters high.

After completion, this stone pagoda remained relatively well-preserved until it was vandalized by a tomb robber in September 1966. In October of that year, disassembly began on the pagoda's main body, with reconstruction completed in December 1966. In this process, a variety of sacred objects including a sari were found within the two-story body as well as the Mugujeonggwang Great Dharani Sutra, a famous Buddhist scripture that has been recognized as the world's oldest woodblock printed document.

<Mugujeonggwang Great Dharani Sutra was discovered during the renovation of Seokgatap.>

Unfettered by sculptural decorations at its base or body, Seokgatap has a simple and majestic beauty. Due to the beautiful proportional balance of each section, it radiates an impression of strength and stability. Having developed from the traditional wooden pagoda format of early Silla, Seokgatap became the prototype of the Korean pagoda. The stone pagodas of Korea that were constructed afterward are mostly based on the design of Seokgatap. 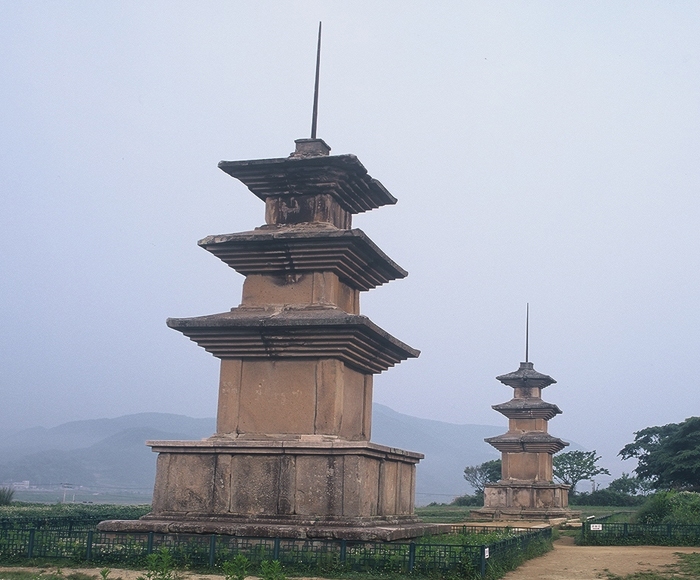 Dabotap: The pinnacle of Korean pagodas through transcendence of traditional norms

Constructed in 742 A.D. along with Seokgatap, Dabotap has a markedly different structure from the typical Silla pagoda format of a two-story base and a three-story pagoda body, and is evaluated as the best example of the heteromorphic pagoda. There are several theories about Dabotap's number of floors, with estimates ranging from two to four floors. The difficulty in determining their exact number is due to different methods of counting the square-shapes and octagonal railings of the square-shaped and octagonal roof stones as separate floors. The base consists of a square-shaped surface, creating a " 亞- "-shape with steps on each of its four sides. The steps are believed to have each had their own railing, with four lions at the corners of the flat stones at the top of each flight of steps. However, during the disassembly and renovation work done by the Japanese colonial government in 1925, the sari and artifacts inside the pagoda body as well as three of the lions disappeared. One lion figure is currently housed at the British Museum in London, while the whereabouts of two other lions are still unknown. There is currently only one lion figure remaining at Dabotap. 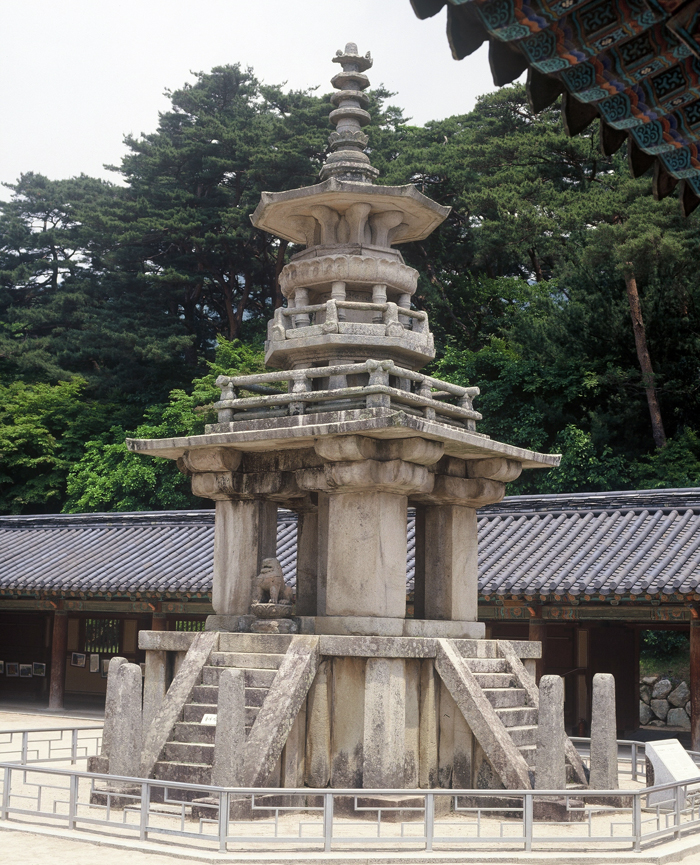 <Dabotap is located at the eastern end of the courtyard of the temple's main building.>

After its construction, Dabotap passed through the generations without significant damage or external changes. Although it is located side-by-side with Seokgatap to form a pair of pagodas, it has a highly unique structure. Therefore, though the two pagodas are not perfectly symmetrical, their uniform base widths and body heights form a special version of "symmetry." The four flights of steps on each side of Dabotap's base, its square and octagonal-shaped railings, and the chamber in the innermost part of its body are all believed to be realistic depictions of the features of the Seven Treasure Pagoda mentioned in the Lotus Sutra. As such, Dabotap is significant not only for the role it plays in reenacting the meeting between Dabo Buddha and Sakyamuni Buddha, but also for its perfect rendering of scriptural content in reality as a unique piece of architecture. It is also regarded as the highlight of stone art in the Unified Silla Period due to its sculptural and artistic beauty. 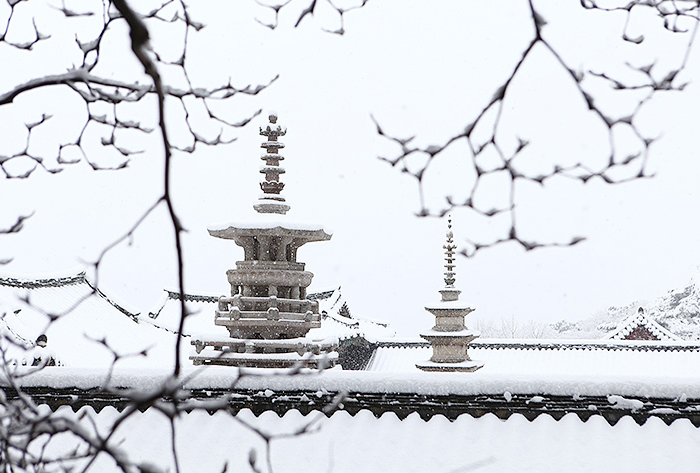 The courtyard of Bulguksa Temple's main building, in which Seokgatap and Dabotap face each other from the western and eastern sides, embodies the peaceful combined presence of Dabo Buddha and Sakyamuni Buddha. The sermons held here maintain a solemn atmosphere and strictly adhere to enlightening sermons of Sakyamuni Buddha.