Mudflat of Korea – an ecological wonder

A place of unmistakable beauty, the Korean coastal mudflats hold a rich ecosystem that serves as a home for an abundance of plants and animals as well as a source of food for the local people.

The famous mud flats of Korea (beol or gaetbeol), one of Korea's natural wonders. Find out the meaning or definition of mud flats. See the mudflat festival. 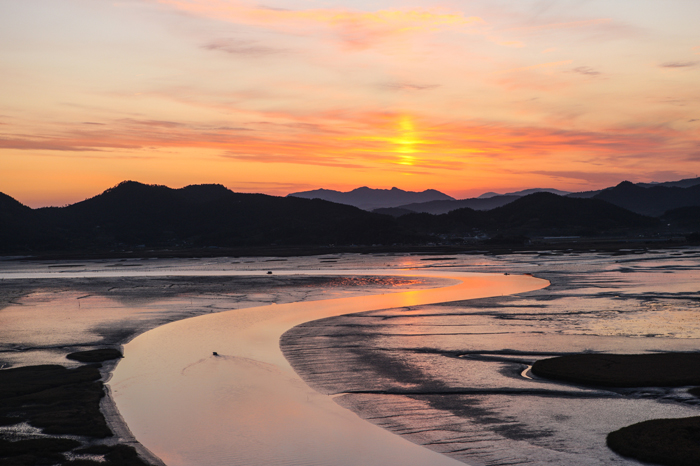 <The S-shaped seaway of Suncheon Bay, one of Korea's most representative coastal wetlands.>

One of the world's top five mudflats

The mudflat area of Korea's western coast is one of the world's top five mudflats, ranked alongside the eastern coast of Canada, the eastern coast of the United States, Germany's North Sea coast, and the mudflats of the Amazon River basin. The mudflat (called "beol" or "gaetbeol" in Korean) is a flat geological feature that results from the prolonged accumulation of sand or clay carried by tidal currents from the ocean seabed. It is hidden underwater during high tides and revealed during low tides. 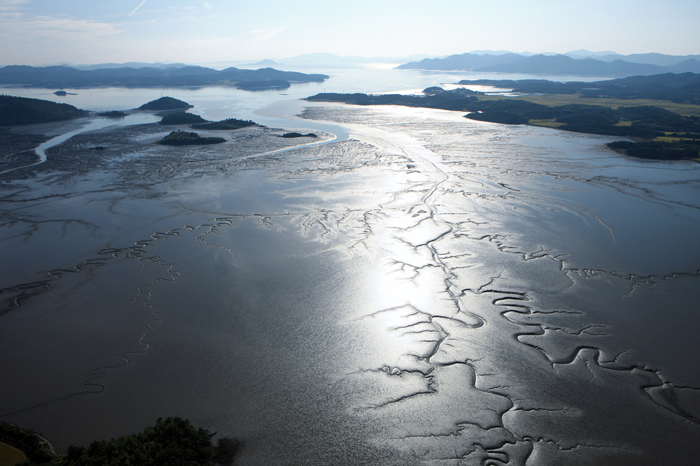 <A mudflat in western coast of Korea revealed during a low tide.>

The area where the mudflat repeatedly appears and disappears in accordance with the tides is called the intertidal zone. For the plant and animal life that exist in shallow intertidal zones, the ebb and flow of the tide is akin to the opening and closing of a refrigerator door as well as a kind of "dinner bell" indicating that it is time to eat. During low tides, land animals search for food in the sediment. Birds including Japanese cranes, egrets, and white herons gather in hopes of finding lugworms and gastropods. High tides signify the end of the food hunt for land animals and the beginning for marine animals. In the past, the mudflat was considered a useless piece of muddy land or merely a place where fishermen could catch clams. Today, the mudflat is highly valued as a habitat for countless life forms as well as a filter that keeps the surrounding coastal waters clean. 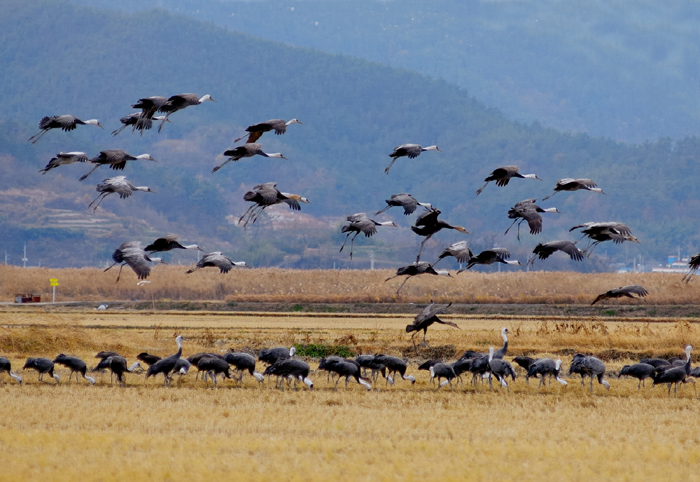 <A flock of hooded cranes at Suncheon Bay.>

Mudflat, a treasure chest of life created by land and sea

Although at first glance the mudflat may look like a muddy wasteland where nothing lives, it is actually inhabited by a variety of life forms including clams, gastropods, crabs, lugworms, spoon worms, and small octopi (called "nakji" in Korean). Because the mudflat is richly endowed with the food marine life need for survival, many organisms live and lay eggs on the mudflat. Furthermore, various types of fish and birds that depend on small mudflat prey also make frequent appearances, creating a complex and richly varied mudflat ecosystem in which creatures ranging from minuscule plankton to birds and fish coexist. Home to one-third of the total number of endangered animal species, the mudflat is truly a treasure chest of life.

People are also part of the mudflat ecosystem. From the prehistoric era until the present, humans have used the mudflats as a source of food; today, mudflats are the source of over 60 percent of Korea's total catch. 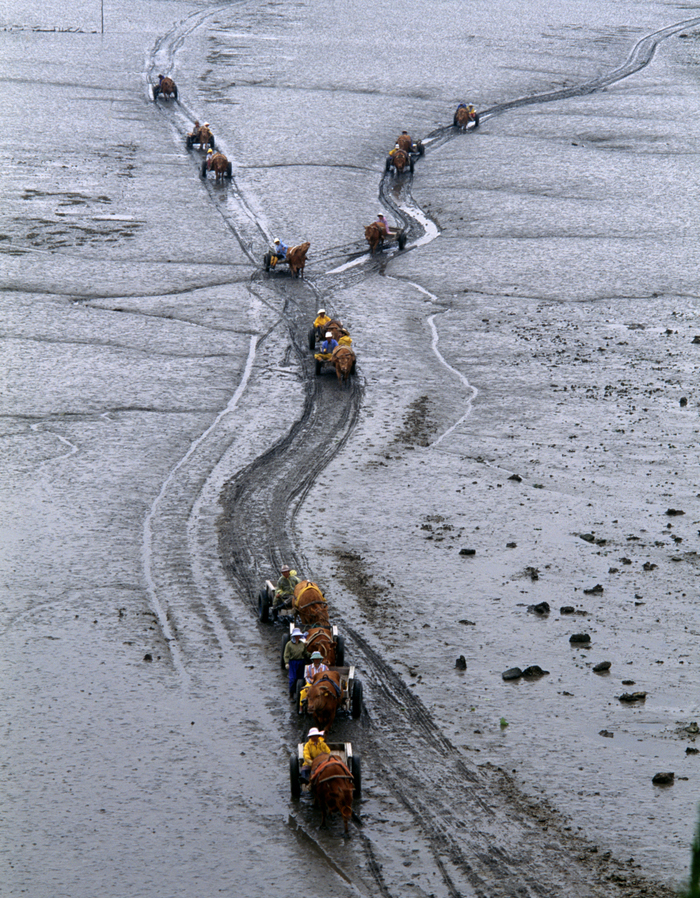 <Fishermen use carts to move their catch from the mudflat to drier ground.>

Mudflats also influence natural disasters and the climate, reducing the damage caused by flooding and typhoons. Because the mud and sand are able to absorb large amounts of water in a sponge-like fashion into the miniscule spaces between their particles, mudflats can reduce the extent of and damage from flooding. In the case of a typhoon, the stems and leaves of the halophytes living in the mudflat swamp absorb the wind's strength, weakening the power of the strong waves. 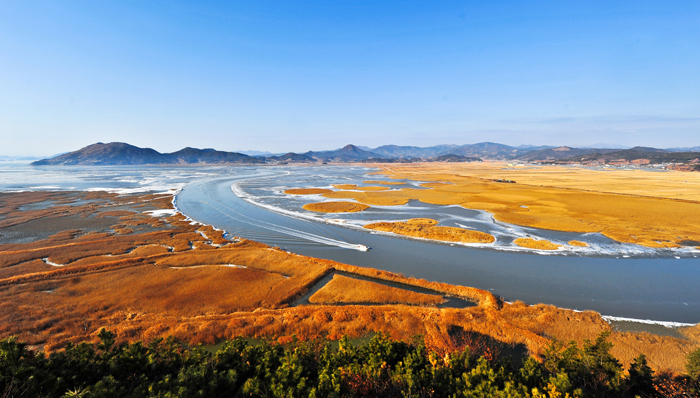 Another function of the mudflat is the purification of contaminants that flow into the ocean. After contaminants produced by factories and homes seep into the ocean, the mudflat's sedimentary layer filters them out like filter paper. The filtered substances are then broken down and cleaned by the plant and animal life of the mudflat. It is said that the purification ability of Korean mudflats is 1.5 times stronger than that of all sewage treatment plants in the country combined. The mudflat also serves as the Earth's "lungs," allowing all life forms on Earth to breathe. Over 70 percent of the oxygen on Earth is produced not by the forest but in the ocean by phytoplankton through photosynthesis. Because each gram of mudflat mud contains hundreds of thousands of phytoplankton, the mudflat is able to produce more oxygen than a forest of the same area.

<A huge mudflat in Sunchon Bay.>

The increased awareness of the value and importance of mudflats and the life forms that live there has also brought more attention to their ability to support the livelihood of fishermen and their families. Accordingly, the mudflat has come to the fore as a symbol of Korea's ecological culture. 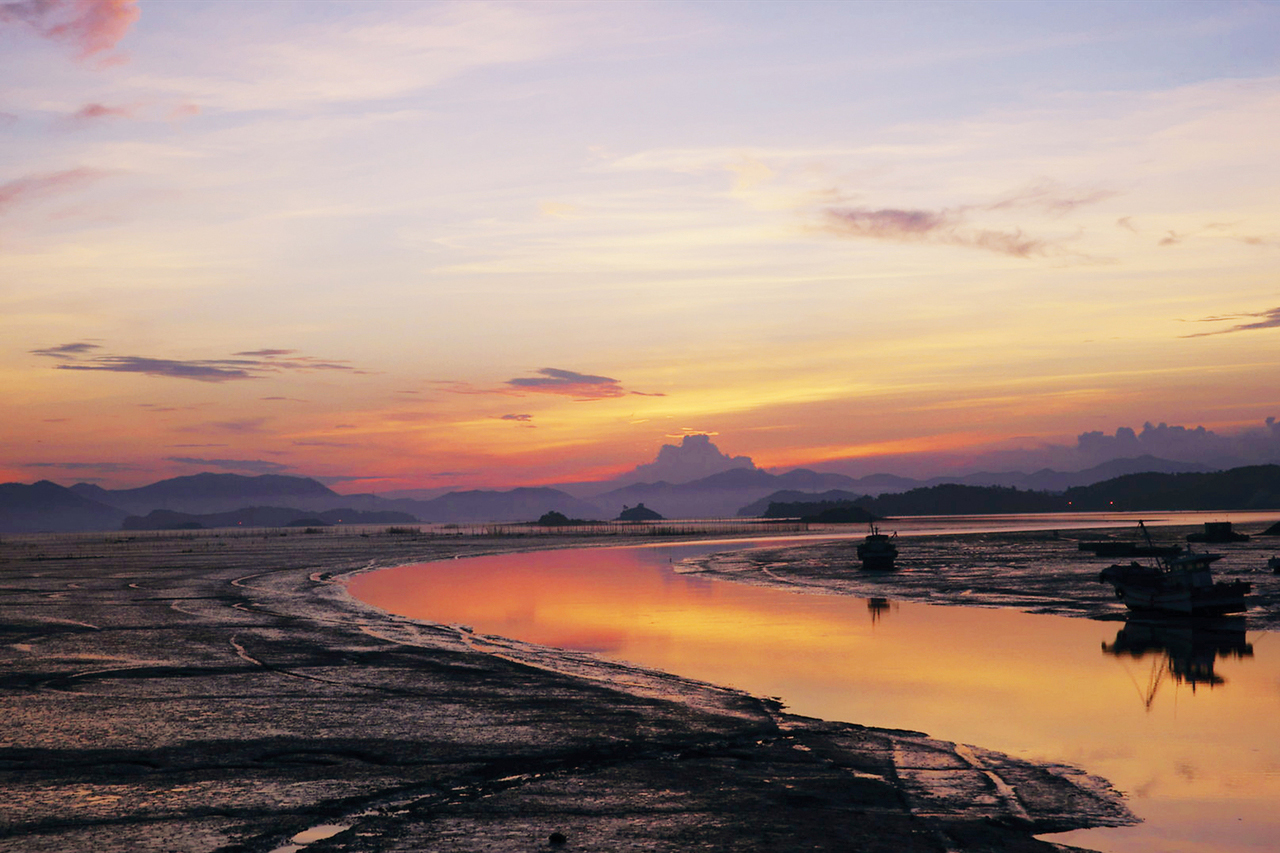 Today the mudflat is a place where people can go to experience the vital role it plays in all life, human life in particular. Many visit mudflats to watch birds or dig for clams. However, due to the large number of people who visit the mudflats, concern over the ecosystem's deterioration has also increased. When visiting a mudflat, be sure to follow all given instructions so that you can do your part in protecting the health of these precious natural wonders. 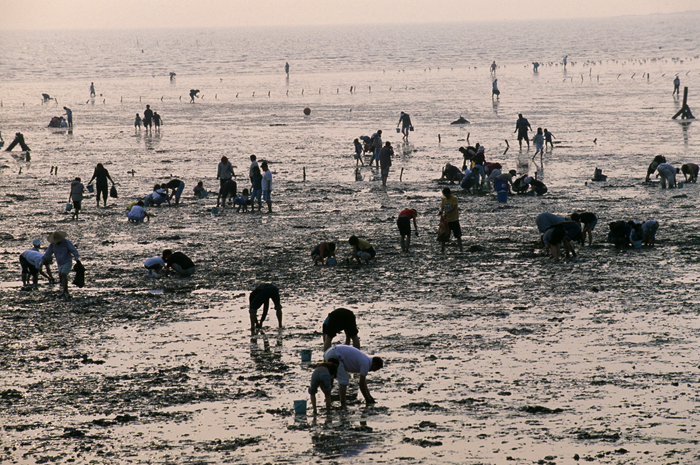 <People dig for clams at the Gungpyeong Mudflat Festival.>

The famous mud flats of Korea (beol or gaetbeol), one of Korea's natural wonders. Find out the meaning or definition of mud flats. See the mudflat festival.