Royal Palaces of Korea – beautiful symbols of strength and service

The home and political seat of Korea's kings, traditional palaces are magnificent examples of the beautiful aesthetics of traditional Korean culture.

Korean palaces including from the Chosun Dynasty. The homes of the Korean kings. Traditional architecture and historical significance. 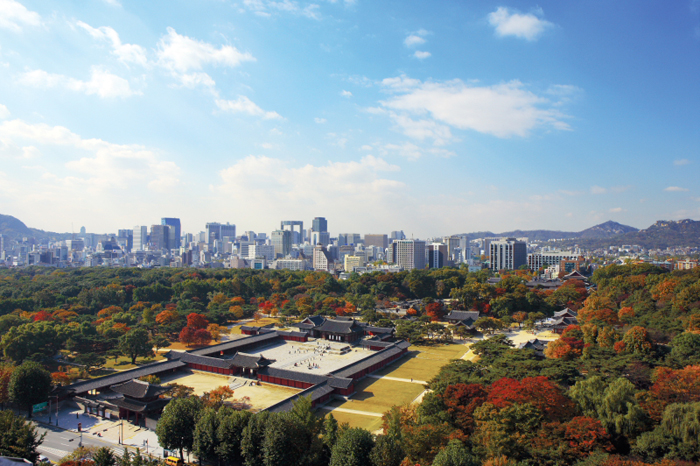 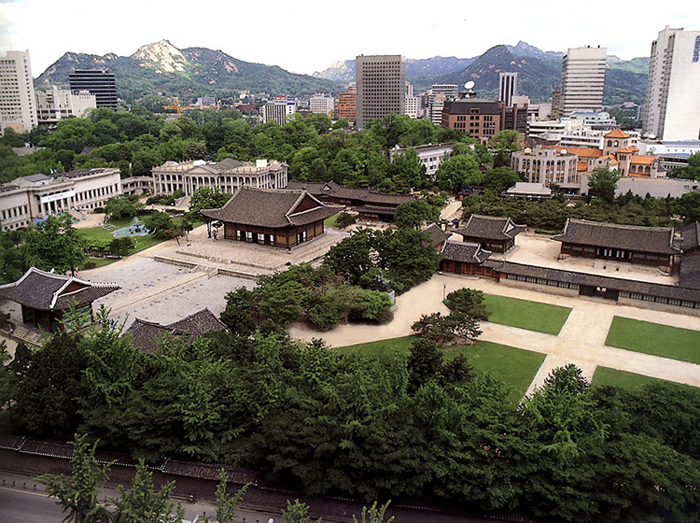 <Joseon Dynasty palaces Changgyeonggung and Deoksugung are both located in the heart of Seoul.>

The palace, a reflection of an era's historical and cultural capability

Where is the best place to get an idea of a country's culture? Think of tourist sites that people frequently visit when traveling in other countries. One of the first places that comes to mind is the world's great palaces, like Warwick Castle of Great Britain, France's Versailles, Osaka Castle of Japan and China's Forbidden City. The same is true for Korea: as surviving relics of the country's history and culture, Seoul's palaces are a must-see for tourists.

With a colorful history of over 600 years, Seoul is the icon of an era and its culture. The traditional palaces that remain standing within its boundaries have borne witness to many historic moments. 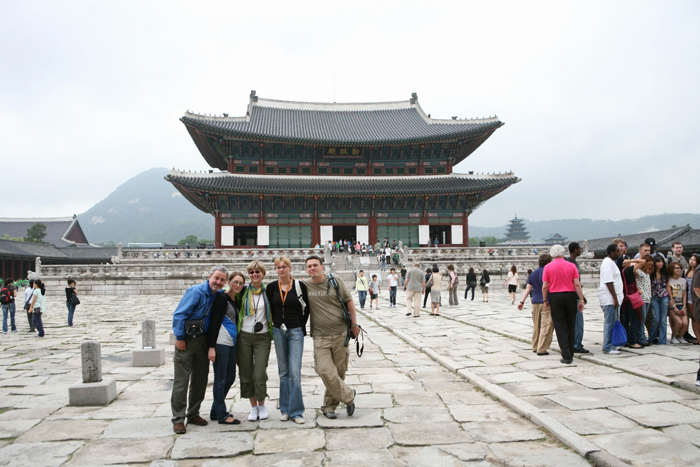 <Geunjeongjeon is the central building of Gyeongbokgung Palace where important state rituals were held and foreign envoys were greeted. Today, it bustles with domestic and foreign tourists.>

Gyeongbokgung Palace built in 1395, which is located on Sejong-ro, Seoul, was the official palace of the Joseon Dynasty. Burned to the ground during the Imjin Invasions, it was rebuilt in 1867 by Heungseon Daewongun, the father of one of the Joseon Dynasty's last kings. It contains many national treasures, including Geoncheonmun Gate, the ten-story stone pagoda of Gyeongcheonsa Temple, Geunjeongjeon, Jagyeongjeon, Gyeonghoeru, Sajeongjeon, Gwanghwamun, and a memorial stupa from Beopcheonsa Temple.

<Aerial view of Gyeongbokgung, the official palace of the Joseon Dynasty.>

Changdeokgung Palace is located in Waryong-dong, Seoul. Built in 1405, it is the best preserved of the Joseon Dynasty's five palaces, and as such was designated a UNESCO world cultural heritage in 1996. It is the site of Donhwamun, the oldest gate tower in Seoul, as well as Injeongjeon, Daejojeon, Seonjeongjeon and Biwon (also, the Secret Garden). There are several other traditional palaces in Seoul with long histories, including Deoksugung Palace in Jeong-dong and Gyeonghuigung Palace (only three of its buildings remain), which was built in 1617.

Realization of the Confucian political ideal through architecture

The palaces of the Joseon Dynasty are filled with the beautiful aesthetics of traditional Korean culture. The palace was where the king and his officials discussed matters of state as well as a place where the king, queen and many palace servants lived. The palace was a multifaceted space, full of ornaments and structures rich in symbolic meaning. Befitting their physical and ideological location as centers of politics, palace architecture sought to realize the dynasty's political ideals with ornaments and structures that represented the authority of the throne. Because palaces were also residences where "real" people actually lived, they contained decorations throughout that represent every human hope and imagination, as well as structures meant to make them more inviting and attractive spaces. Palace decorations, which are positioned based on a palace's spatial features, reveal the nature of the Joseon Dynasty's political ideals and the kind of life it dreamed of for its people. The sculptures, paintings, designs and buildings that symbolize and represent the Joseon Dynasty's values and authority contain the fervent hopes of ancient Koreans to realize a strong monarchy that truly respected and served its people. 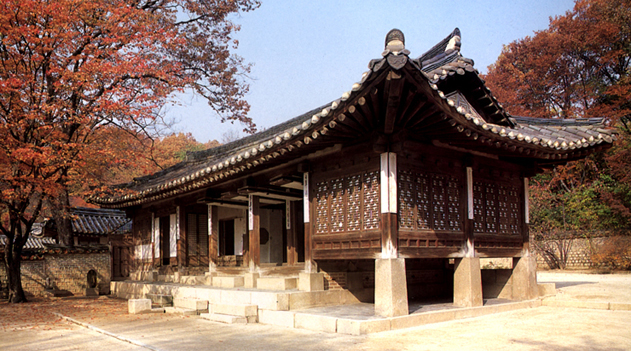 <Nakseonjae, a building in Changdeokgung Palace built in 1847 (13th year of King Heonjong).>

<Hyangwonjeong, a pavilion of Hyangwonji Pond, located in the northern part of Gyeongbokgung Palace.>

The style and grace of life

Korean palaces were originally designed as symbolic worlds of Confucian political ideology. However, they also contain traces of uniquely Korean aesthetics and sentiments. The palace was decorated as a tranquil sanctuary with the simple and pure designs beloved by Koreans. The identity of Gyeonghoeru, a representative feature of Gyeongbokgung Palace, is made clear by the pond it is located in as well as the pond's three artificial islands. The three islands are representations of three legendary mountains in Chinese Daoism, with Gyeonghoeru built on the largest island. Therefore, Gyeonghoeru was the palace's private "hermit world," at which the king and his officials could pretend to be recluses free from the cares of the world. 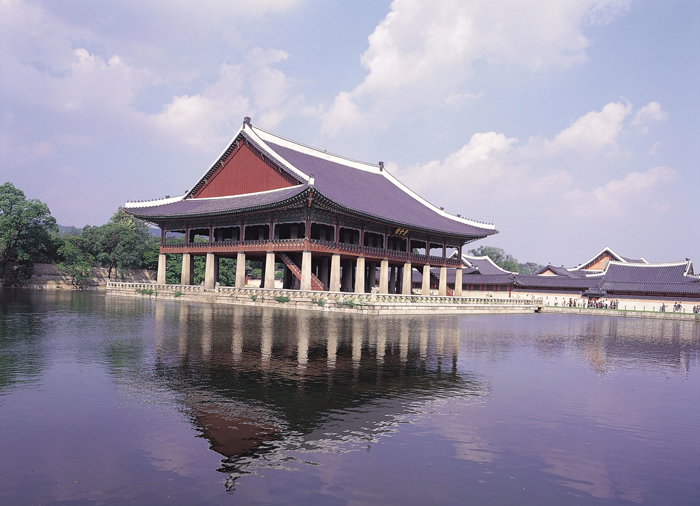 <Gyeonghoeru, which was built in the northwestern pond of Geunjeongjeon at Gyeongbokgung Palace, was the site of banquets held for foreign envoys or national celebrations.>

<Japsang decorate the roof of Gyeonghoeru. Japsang are figurines of hermits, Buddhist monks, odd-looking individuals, and monsters. They serve as both ornaments and guardians of the building.> 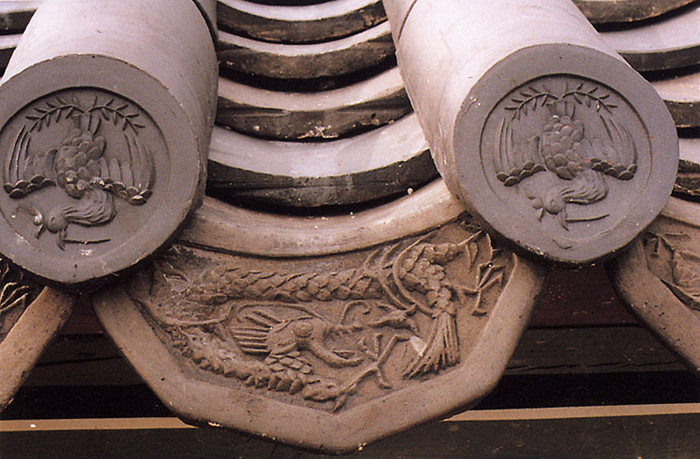 <Roof tiles of Gyeonghoeru decorated with the dragon and phoenix, symbols of the king.>

The oddly-shaped rocks and stone pots as well as the stone pond transform an ordinary living space into one that resembles a landscape painting. Juryeon, wooden boards or paper with poetic verses or sentences inscribed on them that were hung on pillars, are "paintings of poetry" that intensify the sentimental atmosphere and raise the status of the building. Yeongyeongdang, Nakseonjae, Hanjeongdang, and the Secret Garden pavilion of Changdeokgung Palace are famous for their multilayered beauty. Translations are available for the juryeon in each building, thus giving tourists an excellent opportunity to experience the literary refinement of ancient Koreans. 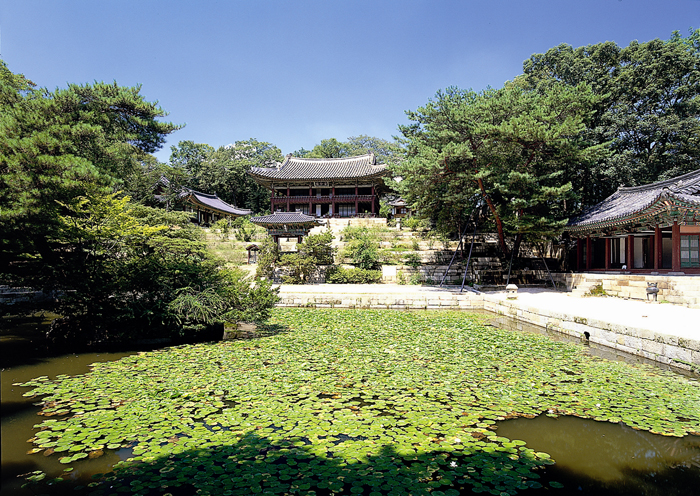 Decorations on the brick walls make living spaces beautiful and meaningful. Brick walls are everywhere in the palace, from the queen mother's quarters to open spaces, quarters where the crown prince would read or rest, and even in the living quarters of palace maidservants. The brick wall of Jagyeongjeon in Gyeongbokgung Palace is famous not only for the exquisiteness of its floral design but also for the very human hopes that it represents. The brick wall of the queen's quarters in Changdeokgung Palace is adorned with the Chinese character for "man," which at first does not seem to match the palace's regal atmosphere. The use of this design is an indication of just how important it was for women of the royal family to give birth to sons. 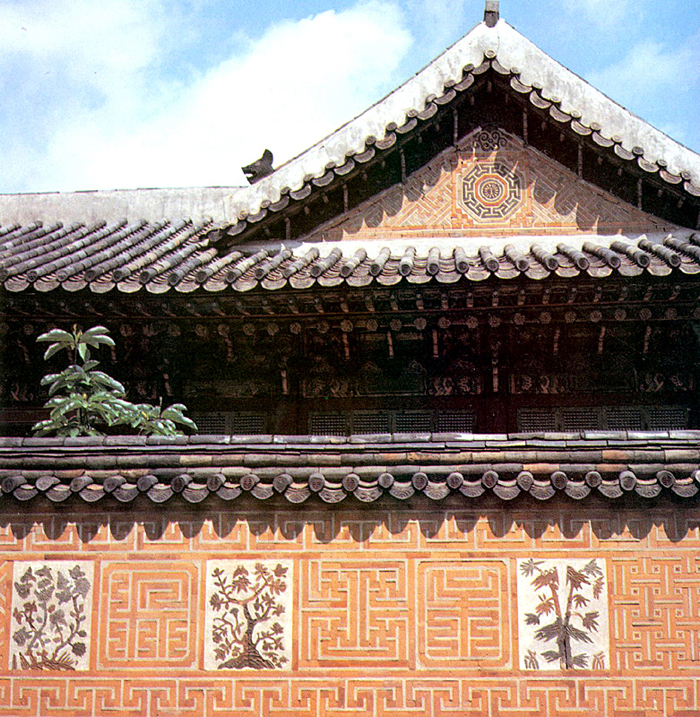 Chimney designs play an important role in transforming the atmosphere of back gardens of palace buildings from dark and bleak to bright and comfortable. Designs are typically of the ten traditional symbols of longevity, symbols of good fortune like the bat, crane, starfish, or devil's mask, or Chinese characters that represent prayers for happiness, longevity, wealth, peace and health. All designs are representative of the basic human desire to live a fulfilling and prosperous life. 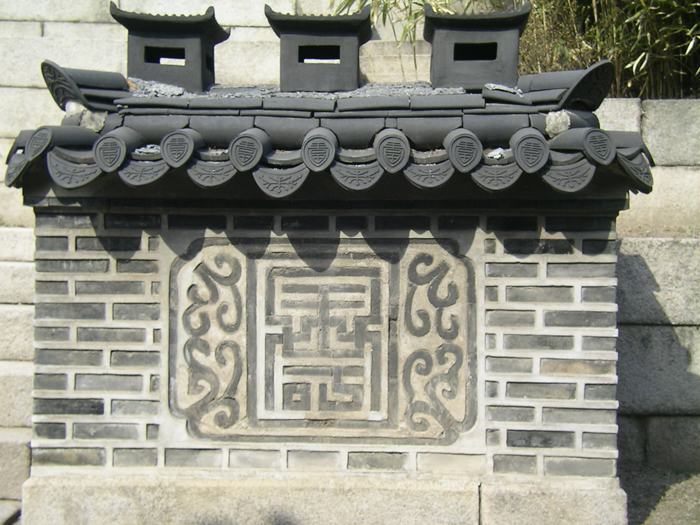 <A chimney of Changdeokgung Palace decorated with the Chinese character for longevity.>

Korean palaces including from the Chosun Dynasty. The homes of the Korean kings. Traditional architecture and historical significance.