Korean Buddha statues are renowned for their balanced simplicity, exquisiteness of form, and their embodiment of peace and tranquility. 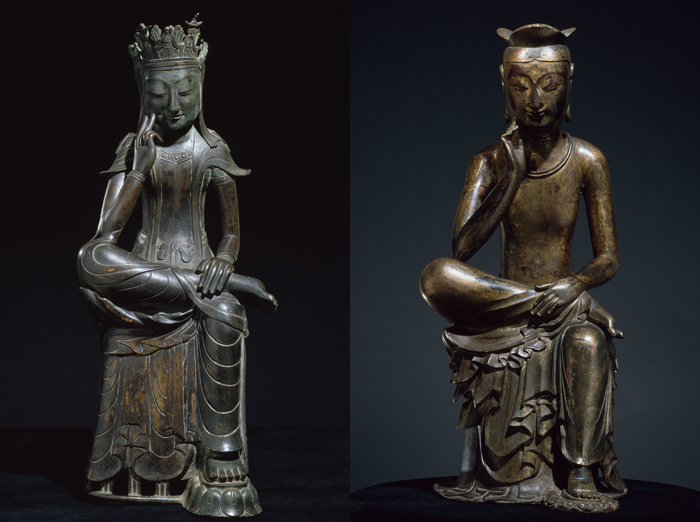 <Two representative gilt-bronze seated Maitreya in Meditation created during the sixth century in the Three Kingdoms Period, now housed in the National Museum of Korea. With the Maitreya's mysterious smile representing enlightenment, these figurines are regarded as the most beautiful of all the Buddha figurines in this position ever created in the world.>

A Buddha statue from Greece

A visitor to Korea can expect to see a landscape of boundless mountains graced with the presence of many beautiful Buddhist temples, each with its own Buddha statue. But even on mountains where no temple exists, it is not uncommon to find at least one Buddha magnificently carved onto a large rock. For Koreans, Buddha statues are a familiar sight—a part of everyday life—regardless of one's religion. However, few are aware that the Buddha statue originated not from India or China, but from Greece.

In the early Buddhism of India, Buddha statues were not made at all. This practice followed the last testament of Siddhartha Gautama (the Buddha), who forbade all worship of figures of him. But beginning in the Common Era, the region of Gandara—an area of Afghanistan that is today known as Peshawar—began to change. The people of Gandara primarily practiced Buddhism, and it is here that Buddhist followers encountered Greek civilization. This encounter left a deep and lasting impression, especially the conquests of Alexander the Great in the early fourth century. During this time period, Buddhists first encountered Greek temples and Greek gods like Zeus and Hercules, a discovery that naturally led to the creation of Buddha statues, their object of religious worship. But Gandara Buddhists, who had no experience making Buddha statues, at first made them out of the statues of Greek gods. In fact, some Buddha statues were made directly out of statues of Hercules. Due to this practice, the Buddha statue took on Western features like deep-set eyes and a high-bridged nose. This type of Westernized Buddha statue was brought to Korea through China. This is why the early Buddhist statues of Korea have faces that look somewhat Western in appearance. 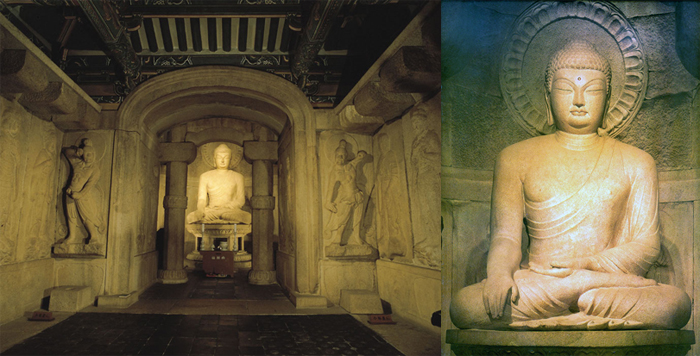 <The Buddha of Seokguram Grotto, a sculptural masterpiece noted for the realistic expression of the Buddha.>

Types and categories of Buddha statues

Buddha statues were created in a wide variety of forms depending on the country and historical era. In general, the Buddha possesses 32 basic characteristics, a few of these being large ears that hang down to the shoulders, a protruding crown, flat feet, and the "third eye" on the forehead (usually a white gem).

Of the various types of Buddha statues, the most important are the Sakyamuni Buddha, the Amitabha Buddha and the Vairocana Buddha. The Sakyamuni Buddha, like the Buddha statue in the Seokguram Grotto, points to the ground with his right hand. This is the moment just before enlightenment, in which he is informing the Earth god that he has become enlightened. Amitabha Buddha is an imaginary figure who governs paradise, the place where humans go after death. This Buddha makes nine circles with his fingers, symbolizing the nine levels of paradise. The Vairocana Buddha is the Buddhist equivalent of the Christian God—the creator being based on whom the Sakyamuni Buddha and the Amita Buddha exist. This Buddha holds the second finger of one hand with the other, which symbolizes the philosophy that the actual world and the fundamental world that allows the actual world to exist are one and the same. 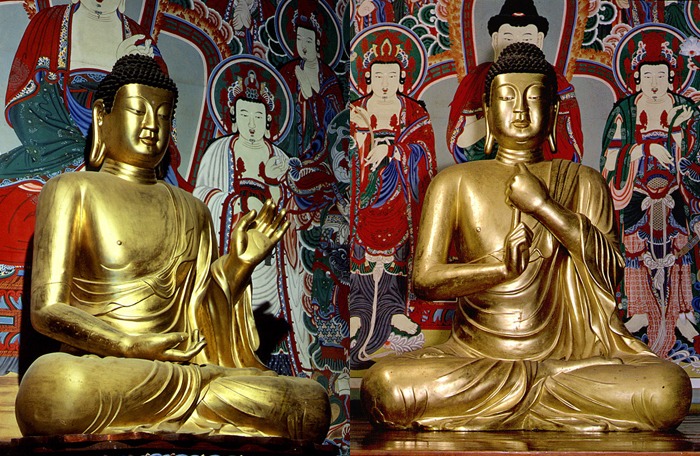 <Amitabha Buddha of the Hall of Paradise (left) and Vairocana Buddha (right) of Vairocana Hall in Bulguksa Temple.>

The face of Korea: Gilt-bronze Maitreya in Meditation

The early Buddha statues in Korea mostly imitated Chinese Buddhist statues, but with cultural development in Korea also came changes to the Buddha statue, which began to take on a distinctly simple and natural sculptural appearance, devoid of ornamentation. The rock-carved triad Buddha in Seosan (National Treasure No. 84), called The Smile of Baekje, one of three kingdoms in Three Kingdoms period (57 B.C.-668 A.D.), is a masterpiece of sculptural technique, renowned for its engaging, sincere and innocent smile. A similar warm and flowing smile can be seen on Japanese Buddha statues as well, which were influenced by their Korean counterparts.

<The rock-carved triad Buddha in Seosan is the oldest and most impressive Buddha statue in Korea. It is called The Smile of Baekje.>

The period in which Buddha statues were most actively created in Korea is from the sixth to the eighth centuries. During this time, the most common type was the meditating Maitreya, which refers to a bodhisattva in a half-seated posture with the right palm resting ever so slightly on the cheek to portray deep contemplation. This statue is believed to have been derived from the Meditating Prince, a depiction of Prince Siddhartha in deep meditation on how to enlighten humankind. In Korea and Japan, the figure is known as the Maitreya Bodhisattva. Among these, the beautiful gilt-bronze Maitreya in Meditation (National Treasure No. 83) shows absolute artistic mastery with its simple yet balanced body posture, the natural expression of the folds of the Buddha's robe and the clearly sculpted eyes, nose and mouth. The subtle smile of the Maitreya Bodhisattva conveys to the onlooker a feeling of noble benevolence. This representative Korean Buddha statue is beautiful for its balanced simplicity and for its embodiment of the aspiration toward peace and freedom. 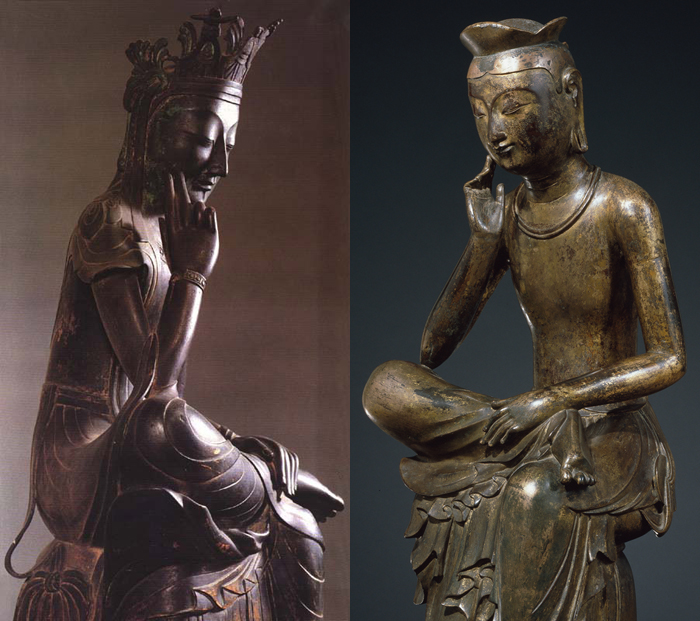 <Two gilt-bronze seated Maitreya in Meditation in the National Museum of Korea.>