Rich in imagery, the ancient practice of painting unique and colorful designs on traditional Korean houses exemplifies peace and stability within an exquisite art form. 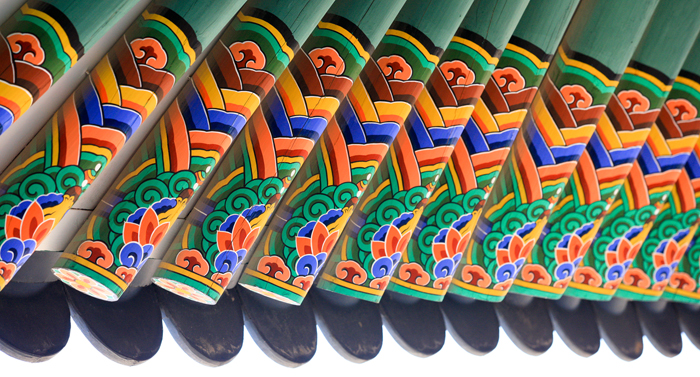 <Dancheong decorates the eaves of a royal palace building.>

Colors and designs full of meaning and purpose

Dancheong, which literally means "red and green," refers to the beautiful five-colored designs found on the walls, pillars and eaves of traditional Korean wooden buildings. Dancheong not only had a decorative function but also a protective one, preserving a building's wood from rotting due to wind, rain and vermin. The vibrant, bright colors were also believed to protect a building from evil spirits and emphasize the authority of its resident. 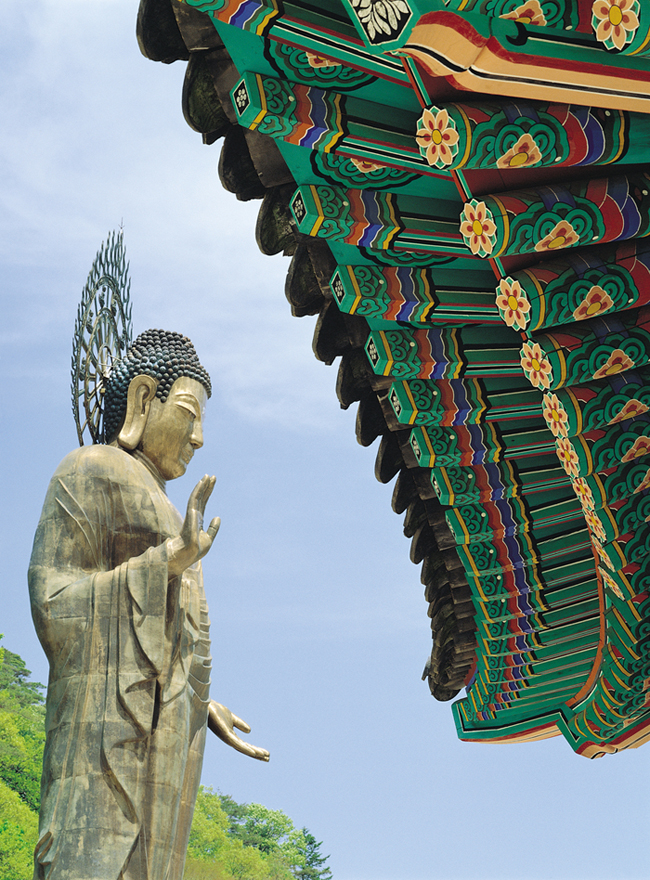 <The dancheong and a Buddha statue at Beopjusa Temple together create a unique and beautiful harmony.> 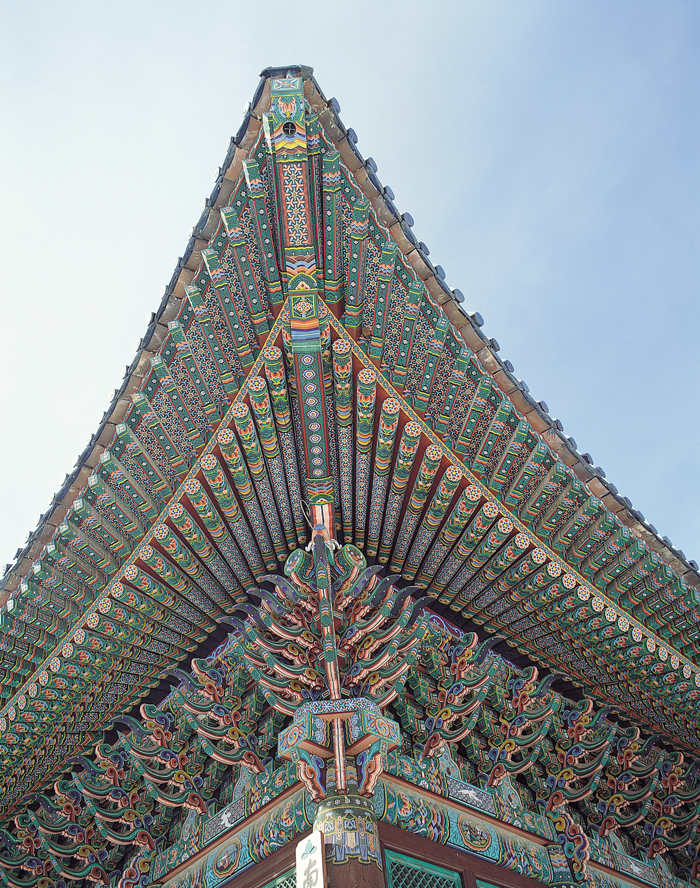 The history of dancheong dates back to prehistoric times, originating from the practice of decorating ceremonial altars or the faces of officiating priests during religious rituals. Traces of dancheong can be found on tomb wall paintings from Goguryeo (one of the ancient Three Kingdoms of Korea) and at old temple sites. A Chinese Sung Dynasty envoy who traveled to Goryeo noted, "The banisters of court buildings are decorated with red lacquer and bronze, and the dancheong are majestic and splendid." 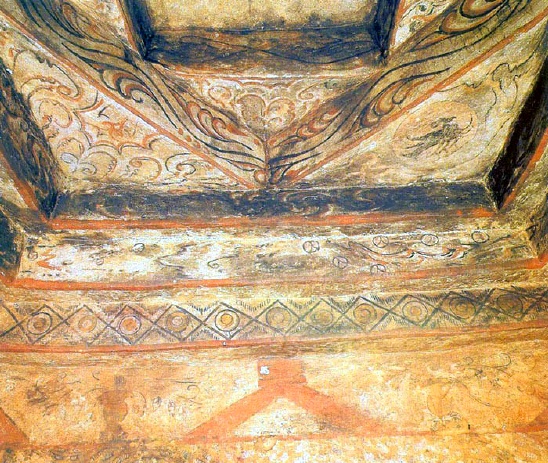 A world of colors, design and rich symbolism

Dancheong consists of five basic colors: blue, red, black, white and yellow. These basic colors, which can be mixed together to form countless other colors, are related to the traditional five elements theory. Blue represents east, the dragon, spring and the element of wood among the five elements; red signifies the south, birds, summer, and fire; white symbolizes the west, tiger, fall, and gold; black characterizes the north, hyeonmu (an imaginary animal that is part turtle and part snake), winter, and water; and yellow represents the center, the periods between seasons, and Earth. The incorporation of the five elements theory into dancheong epitomizes the ancient Koreans’ desire for stability and peace in the present life and a rewarding afterlife as well. 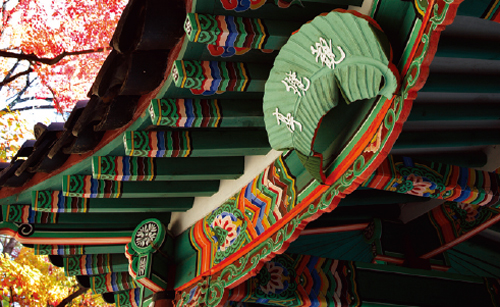 <Dancheong of Changdeokgung Palace, one of the five major palaces of the Joseon Dynasty.> 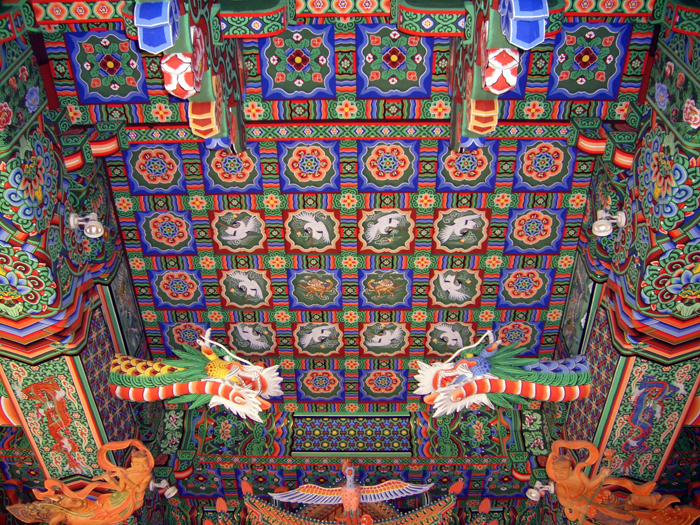 <Dragons attached to the ceiling of Daewoongjeon (main Buddha hall of temple).> 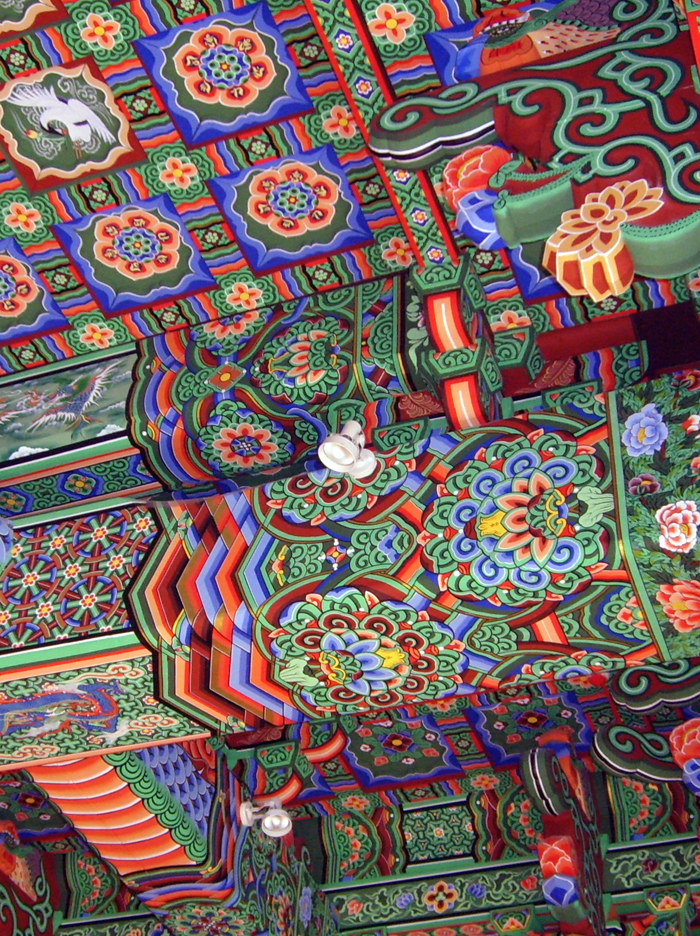 Dancheong, which protected Korean homes for millennia and symbolized prayers for good fortune, are now difficult to find because Koreans today no longer paint dancheong on the pillars or ceilings of their homes. However, this does not mean that dancheong has disappeared entirely. Modern artists and designers are revisiting and reviving dancheong, using it as inspiration for new works of art and handicrafts. The primal, pure beauty that exudes from the harmony created among the strong primary colors and the modern atmosphere evoked by dancheong's geometric designs are being reevaluated and rediscovered not only in painting but also in clothing, on the stage, in architecture, and in furniture. 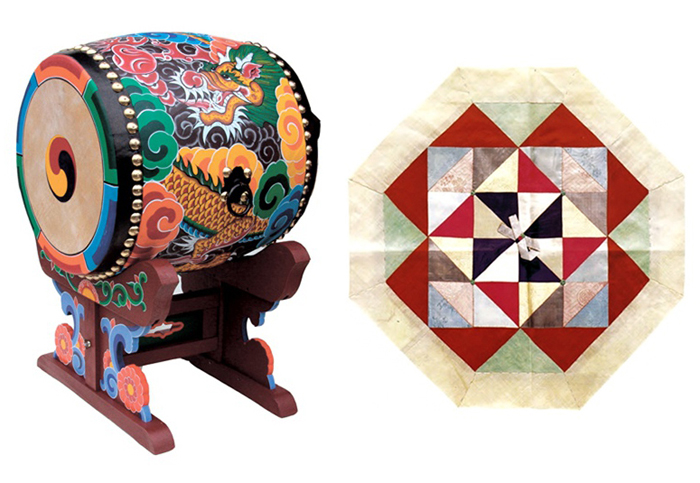 <A traditional drum (left) decorated with elaborate dancheong designs. A bojagi (right) decorated with the subtle beauty of asymmetrical patterns. The word “bojagi” is a general term used to describe the square-shaped cloth used for wrapping objects, for table placemats or for covering valuables.>