Standing tall as a watchful yet compassionate presence, these expressive stone statues served as timeless guardians for the common people. 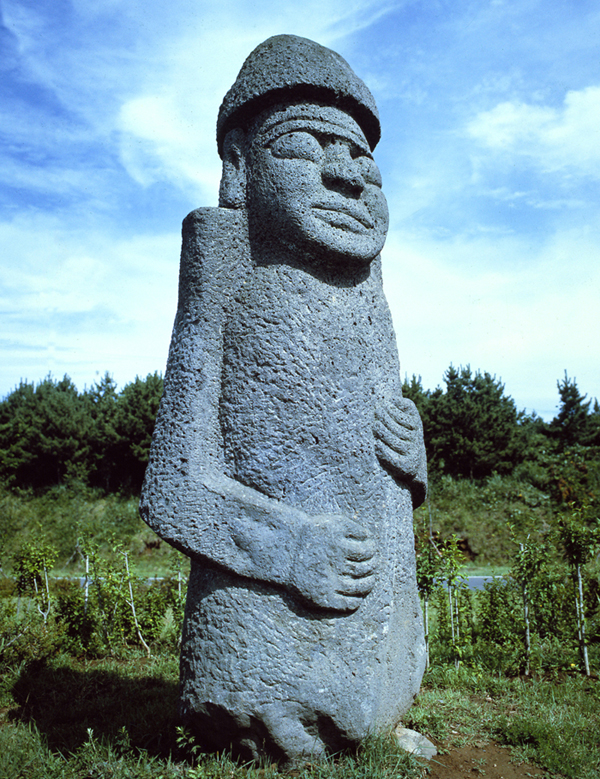 <Dol hareubang made of volcanic rock from Jejudo.>

What is the Dol hareubang?

The Dol hareubang (also, "hareubang") of Jejudo Island has round and bulging eyes, a firmly closed mouth, and a soldier's hat on its head, and stands in a stooped posture with shoulders raised high and hands gathered at its stomach. With its unique appearance sculpted out of hole-ridden basalt, the Dol hareubang literally stands as the most famous symbol and face of Jejudo Island. The Jeju dialect for "grandfather made out of stone" ("dol" means stone in Korean), "Dol hareubang" was originally a word used for many generations by children amongst themselves. It was in 1971 that it was designated as the figure's official name. Previously known by different names according to region, the Dol hareubang was called "wuseokmok" in Jeju-si, "beoksumeori" and "museokmok" in Seongeup-ri, and "museokmok" in Daejeong-eup. Judging by these names, there seems to have been some link with the stone statues (called jangseung) of mainland Korea. 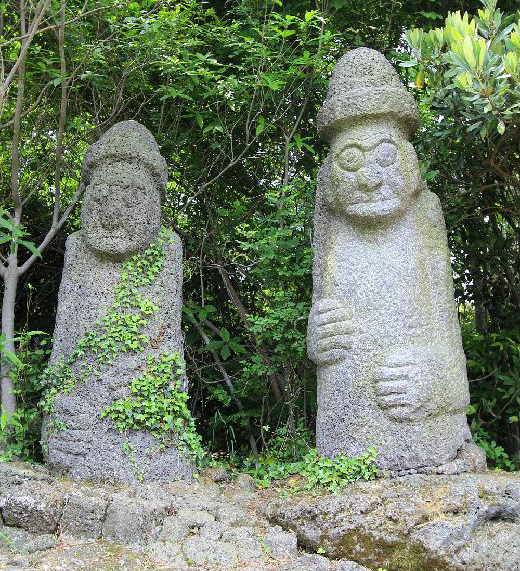 <A female (left) and male (right) hareubang stand side-by-side as if reminiscing about the past.>

However, in contrast with mainland jangseung that most commonly do not have hands, Dol hareubang always have two hands placed in front of the chest or stomach. As well, Dol hareubang are always beardless and have closed mouths without any teeth visible. Most are built in pairs standing together. One usually has its right hand raised, while the other has its left hand raised. A raised right hand indicates that the figure is a civil official, since it was believed that one holds a brush with the right hand, while a raised left hand indicates that the figure is a military official, because a bow and spear are held with the left hand. These pairs of civil and military official Dol hareubang acted as village guardians—protectors of the common people from disasters and misfortune. 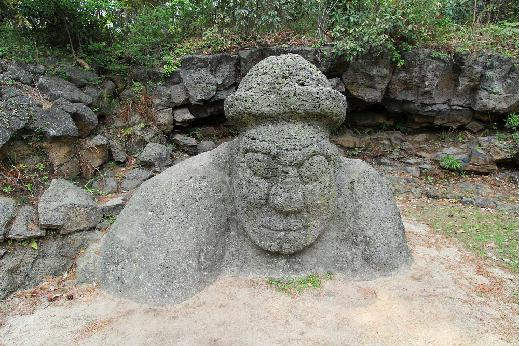 <A hareubang that looks half buried in the ground. Its round eyes, firmly closed mouth, and soldier's hat are well-expressed.> 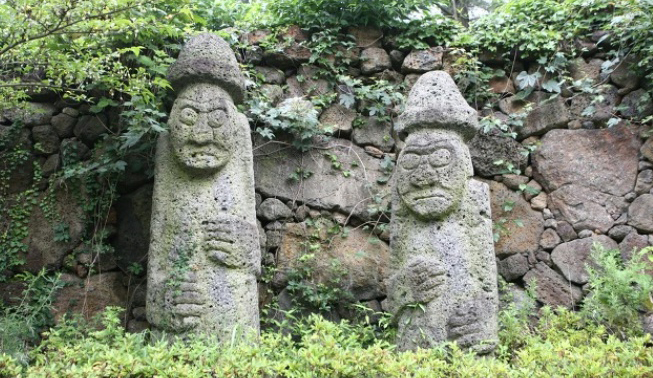 What is the role of Dol hareubang?

Compared to the role of jangseung which were considered religious statues to which one prayed for good fortune, the Dol hareubang's role was mainly that of protector or guardian of fortresses. The Dol hareubang visible today were moved from their original locations near the Jeju Fortress wall due to urbanization. Judging from the fact that none were found in nearby villages, it is believed that Dol hareubang were most likely regarded as fortress guardians. The holes on their bodies (evidence that jeongnang –thick wooden planks found at the main entrances of traditional Jeju homes – were hung on them) are further proof of their guardian role. 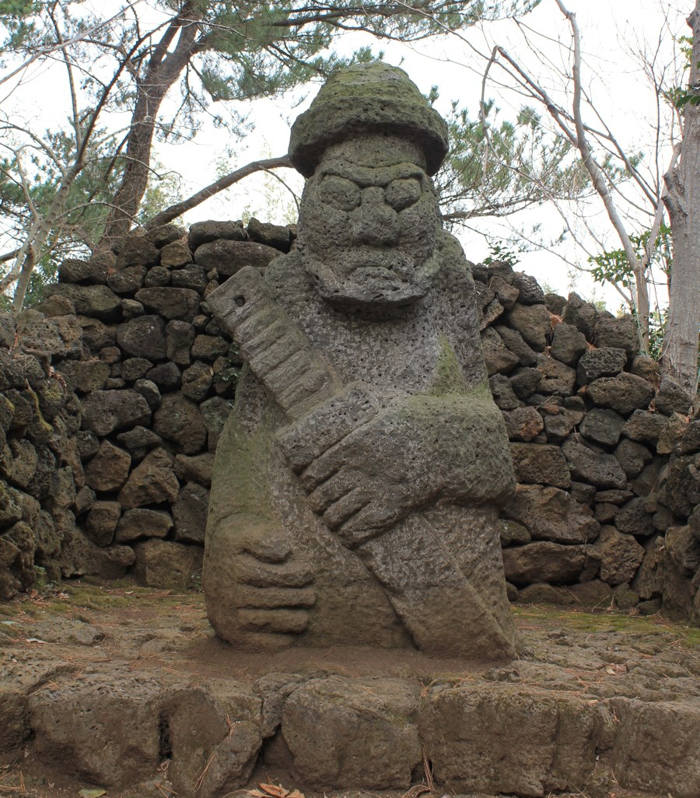 <A Dol hareubang with a large sword that acted as a gatekeeper.>

When did Dol hareubang begin?

The Geography of Jejudo (Tamlaji) contains the following description: "The ongjungseok (Dol hareubang) is found at the eastern, western and southern gates of the Jeju Fortress. They were first built by Kim Mong-gyu in the 30th year of King Yeongjo (1754), but after the three gates were torn down, two were moved to Gwandeokjeong while two more were relocated to the entrance of Samseong Temple." However, this alone does not make clear whether the relocated Dol hareubang were made by Kim Mong-gyu himself or whether Kim simply moved existing Dol hareubang to the fortress gates. The only fact of which we may be certain is that Dol hareubang existed in 1754. 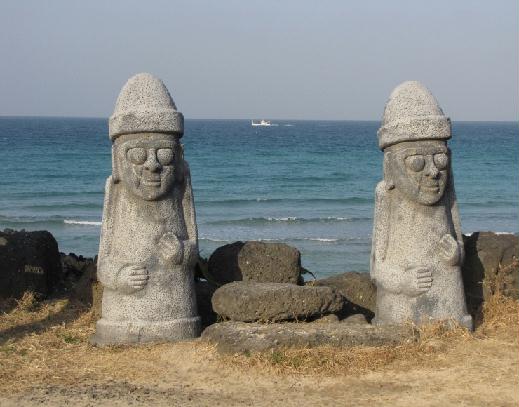 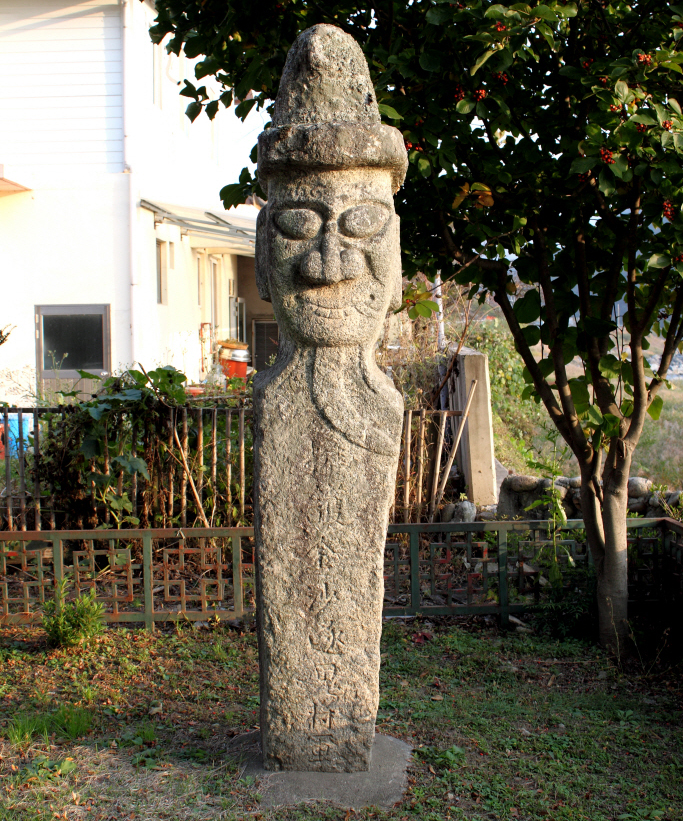 <A stone jangseung in Namwon that dates back to the Joseon Dynasty closely resembles Dol hareubang.>

Where did Dol hareubang come from?

Concerning the origin of Dol hareubang, other than the theory that they originated from mainland Korean, there are two major theories. One is the southern origin theory, which argues that the practice of worshipping giant statues (like the Moai statues of Easter Island) prevalent in the South Pacific spread to Korea. The other is the Mongolian origin theory, which points to the similarities between Mongolian stone statues called "huncholo" and Dol hareubang; this theory asserts that Jejudo Island was subject to Mongolian cultural influences due to being governed by the Yuan Dynasty in the late 13th century. There is also the theory that Dol hareubang developed spontaneously in Jejudo without any outside influences. 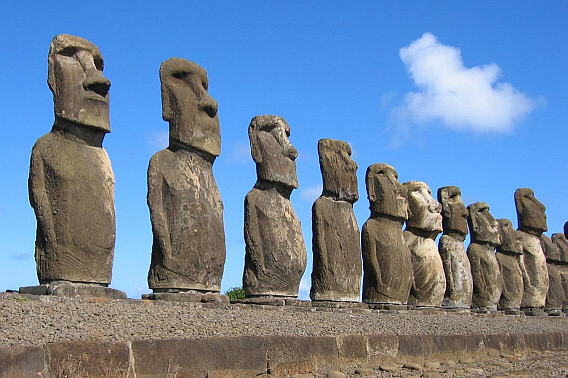 Though the Dol hareubang of Jejudo vary slightly in shape, what they all have in common is that they are larger and have more solemn facial expressions than the stone jangseung of other regions of Korea, giving them a more authoritative presence. The familiar Dol hareubang figurines sold as Jeju souvenirs are based on the Dol hareubang shape of Jeju City.