The Korean mask is a unique dichotomous symbol, embodying the significance of tradition while allowing the wearer to realize full self-expression and liberation. 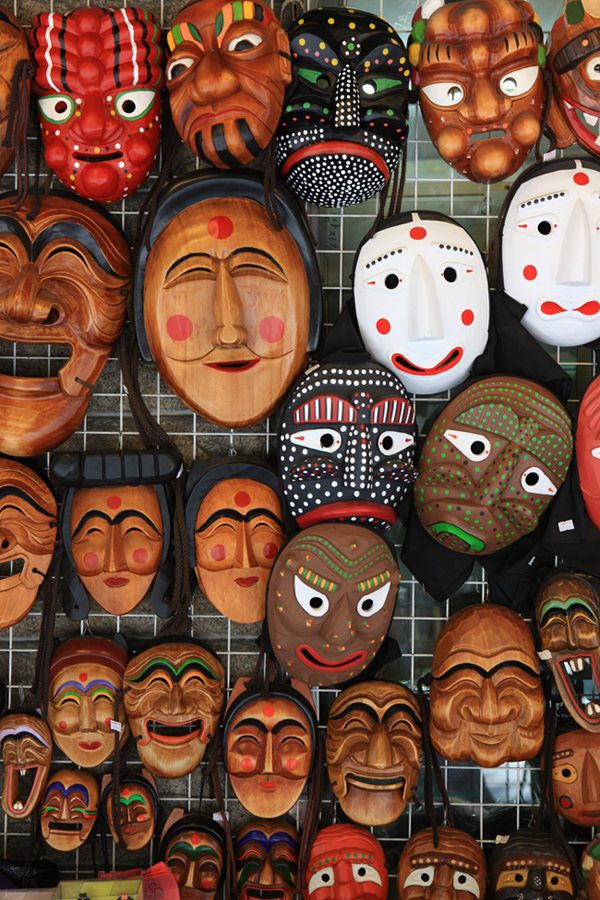 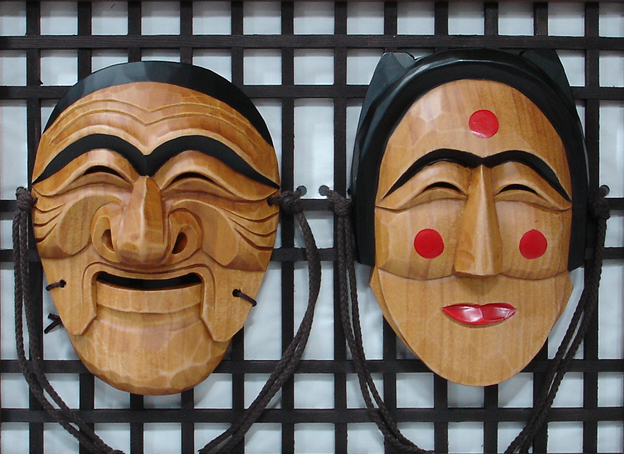 <The Andong hahoetal is a sacred treasure that has protected Korea's villages for centuries and is one of the most representative images of Korean culture.>

Tal, the face of the gods who have descended to Earth

"Tal" is the Korean word for "mask." For ancient Koreans, the tal was a sacred symbol of the gods (or a particular god). As such, it was especially valued and worshipped, and was always kept a certain distance away from living quarters. At the same time, the tal was believed to be capable of warding off illness and danger. The singing and dancing included in mask performances originate from the practice of praying to the gods to maintain peace and prosperity in the village and to protect people from danger and illness. 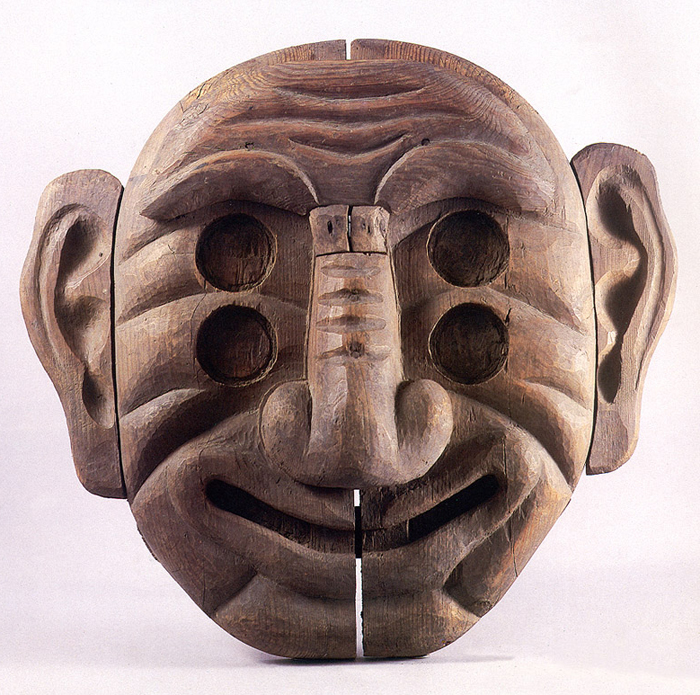 <The bangsangsital of the Joseon Dynasty was believed to ward off evil spirits during royal events.>

Masks that sing and dance

As civilization developed, masks gradually evolved in function from being sacred objects used in shamanism to becoming forms of entertainment and art. By the fifteenth century, the perception of the mask as the creator of excitement and fun at festivals became more firmly established. This shift in function led to the birth of talchum ("mask dance") and talnori ("mask play"). Both developed into unique forms of rural theater, with interesting and notable differences in content and approach by region. The wonderful, distinctive masks and mask dances of Korea, including the Haeseo talchum of Hwanghae Province, Sandae nori of Gyeonggi Province, Ogwangdae nori and Deul nori of the Nakdong River areas, and the Sajatal nori of Hamgyeong Province, are recognized throughout the world for their festive, spirited presentations. Once a person dons a mask – men and women, young and old, nobility and commoners – all are freed from social conventions and restrictions. The appearance of the Korea mask itself is also liberated by convention. Nevertheless, everyone manages to find a part of the mask with which they can identify. In this way the mask is truly the face of the heart's hidden desires. 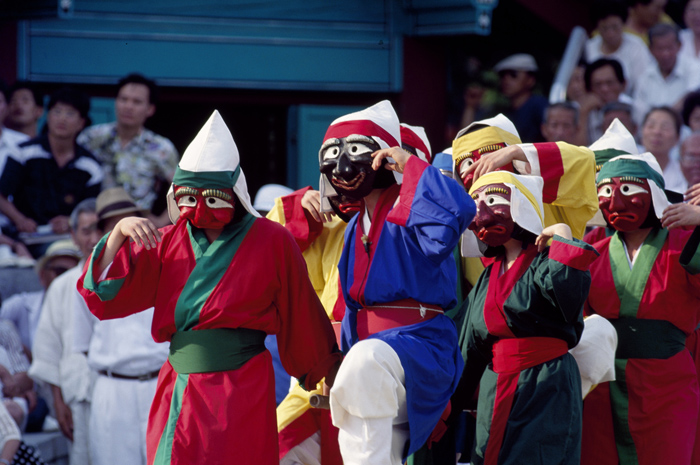 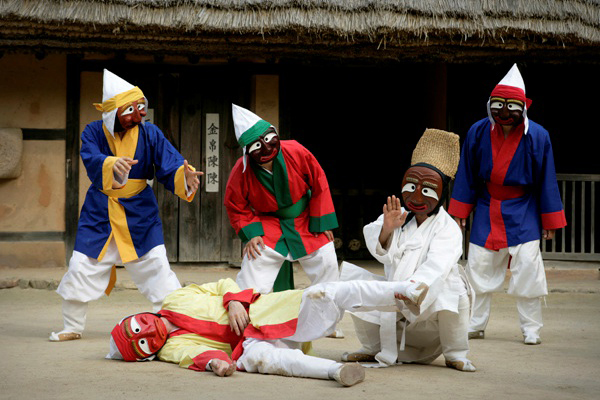 <A doctor applies an acupuncture needle to a patient in the Songpa Sandae nori.>

Korean masks are grotesque and vividly colored to the point that some may find them vulgar. The exaggerated eyes, nose and mouth seem to have been attached to the mask in a haphazard manner. The nose is often stumpy, the eyes slanted fiercely upward, and the mouth wide and heavily crooked. Masks are painted in vivid primary colors, representing both the individual personality and social class of the character as well as his or her age and gender. The mask of an elderly character, for example, is black and dark; that of a young character is red and bright; while that of a young female character is white. In terms of personality, a red, darkly-colored mask represents recklessness and aggressiveness; a yellow or lightly-colored mask characterizes foolishness and incompetence; and a black or darkly-colored mask exemplifies an anxious, socially marginalized character. To symbolize a character's duplicity, masks are sometimes painted half red and half white. 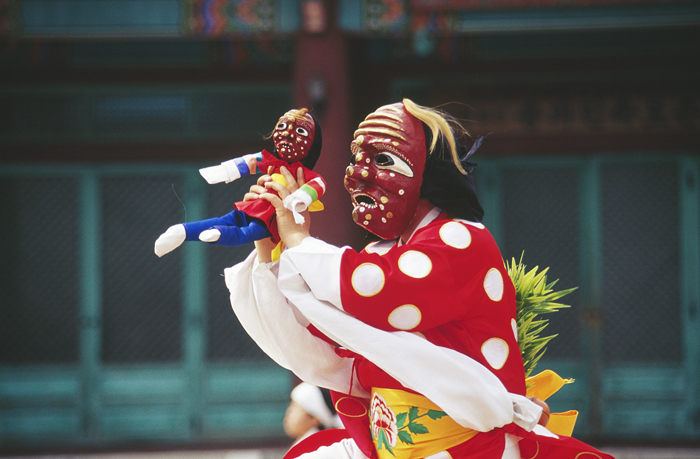 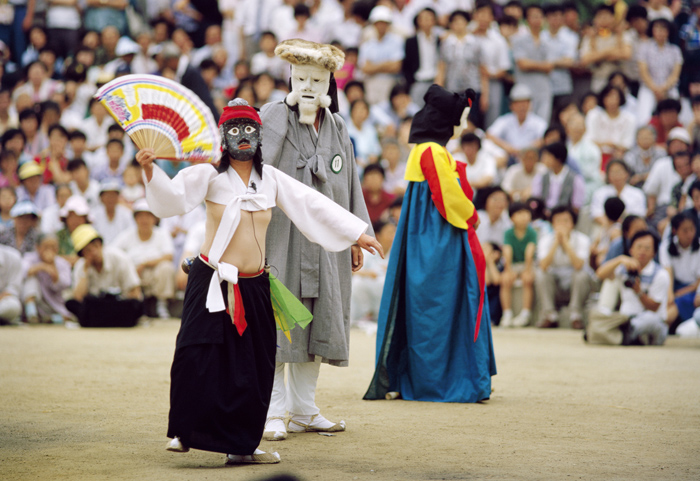 <An old husband and wife enact a fight in Gangnyeong talchum.>

Talchum: Mocking the world while wearing someone else's face

A lively festival in which the actors wear grotesque masks, move their bodies to their own rhythms, shout out at the world to their hearts' content, and release their trapped desires and suppressed anger—this is an accurate description of the Korean mask dance. 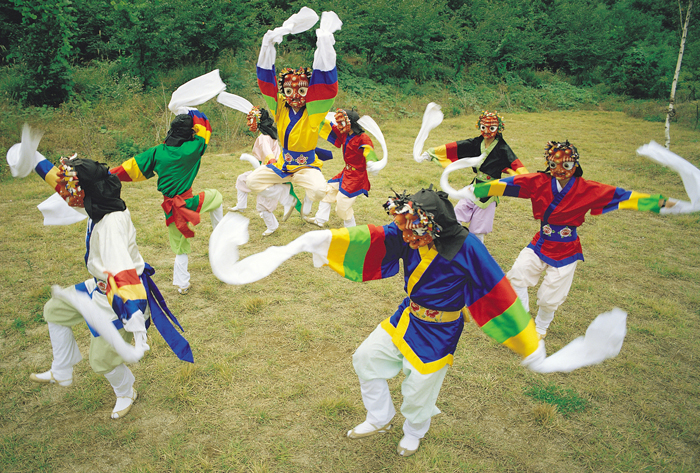 The Bongsan talchum is one of Korea's most representative mask dances. Composed of seven acts, the Bongsan talchum is an outdoor play ("madanggeuk" in Korean) that consists of dance, music and dramatic dialogue. In the madanggeuk, there is no clear distinction between the stage and audience members who intervene freely in the play. This unbounded interaction between the audience and the actors makes the madanggeuk a very unique traditional performing art in Korea as well as throughout the world. The main character of Bongsan talchum is Malttugi, a servant of a yangban (upper-class) family. The yangban class, renegade Buddhist monks, and tyrannical and patriarchal men are mocked and satirized throughout the performance, giving a voice to the difficulties suffered by the commoner class as well as their will for resistance. These are views that were difficult—if not impossible—for them to express in "real" life. 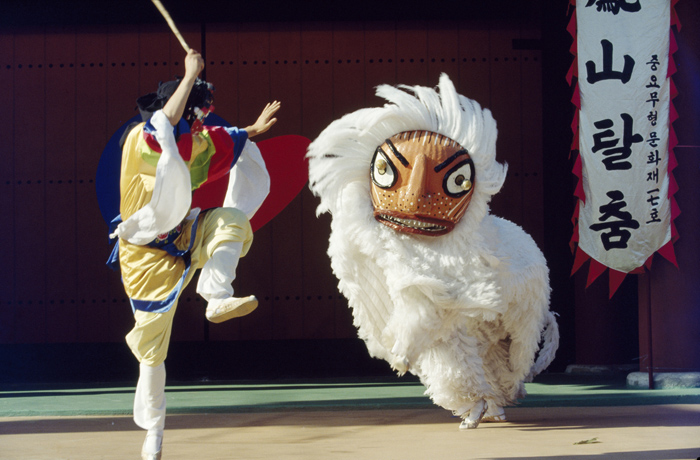 <A monk dances with a lion in Bongsan talchum. Buddha sent a lion to punish the apostate monk; the monk repents his sin and dances with lion.>

The mask dance is truly a festival for the people, in which their suppressed desires and ambitions can be put on display without fear or shame. The characters mock and satirize the duplicity and foolishness of the ruling class and pray for a new world and a better future. The Korean mask can be thought of as both one's own face and a representation of our hopes for the future. 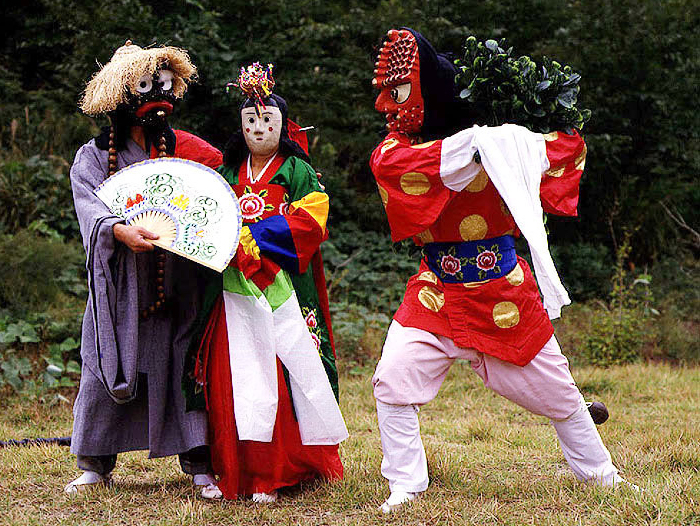 <Bongsan talchum expresses the humor and satirical perspectives of the common people.> 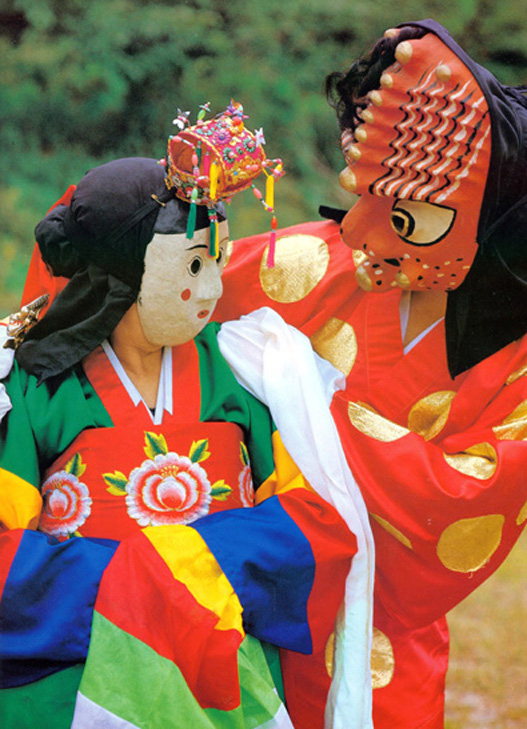 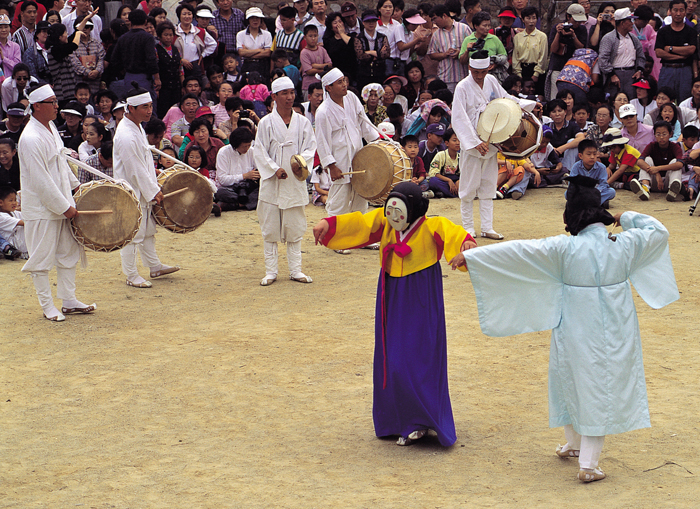 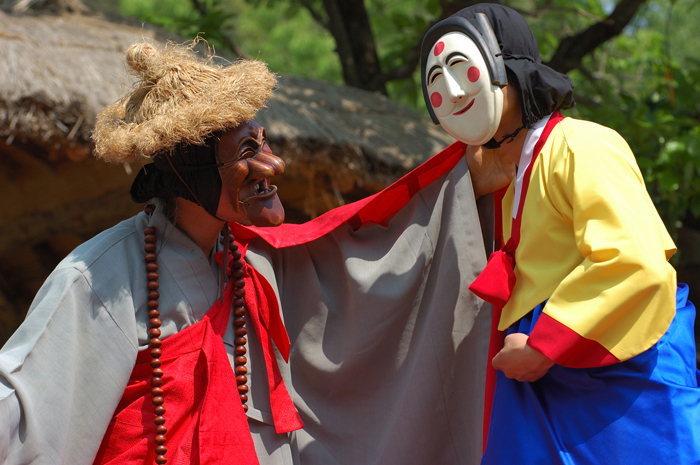 <The depraved monks are satirized in Hahoe Byeolsingut Nori.> 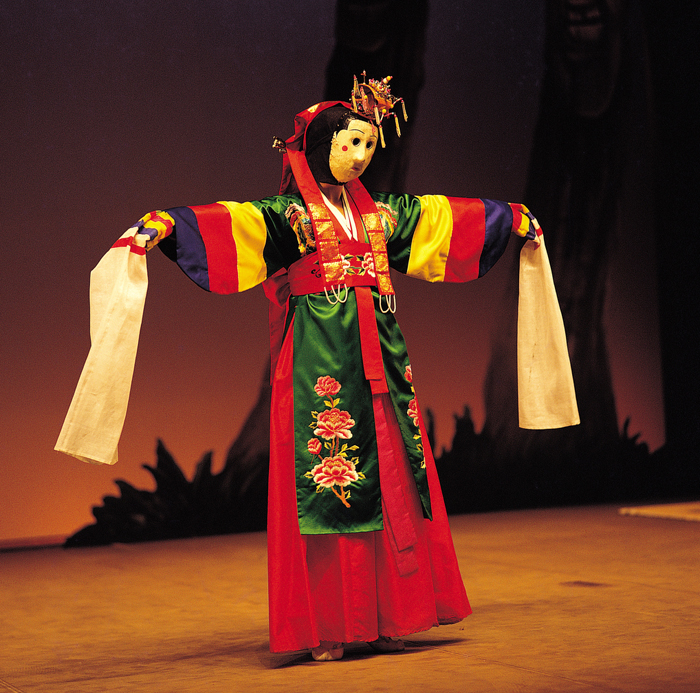 <An artisan is making Cheoyong masks.>