Minhwa (Korean Folk Painting) – a reflection of the commoner's hopes

An extraordinary, unconventional form of traditional Korean art, minhwa illustrates the common people's freedom of expression and reveals their innermost thoughts and dreams.

The folk painting of Korea – the art work of the common people (Minhwa) from bird and flower paintings, to the tiger and the dragon and the ten longevity symbols. 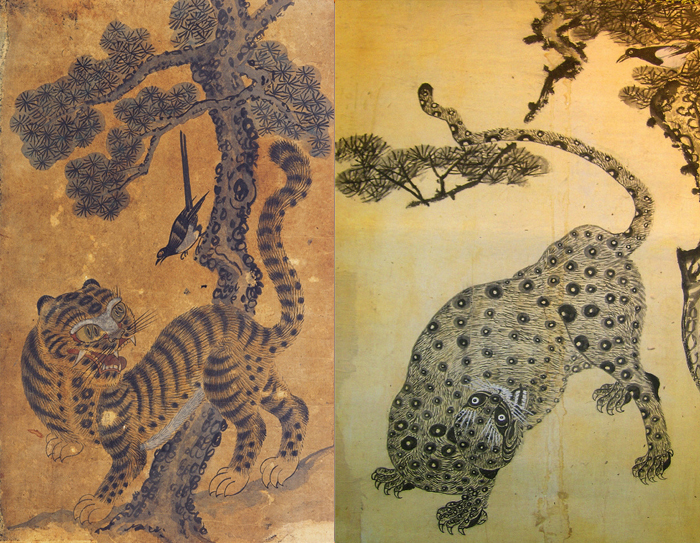 <In a folk painting of a magpie and a tiger, the tiger is depicted as friendly and funny. The magpie seems to be mocking the tiger.>

The most absurd tiger in the world

Korea was once "the land of the tigers." Although they are nearly completely extinct today, Korea used to have so many tigers that they could be found on nearly each of the country's many mountains. The tiger, which often came down to human villages to eat livestock and even harm people, was considered to be more than just an animal by ancient Koreans. It was both feared and respected, given the nickname "prince of the mountain." The tiger is also the most frequently depicted subject in Korean folk paintings (called "minhwa" in Korean). But in minhwa, the fearsome and sacred tiger is depicted as an absurd creature—painted in unhindered and humorous strokes to the point of being shocking. This is certainly not because minhwa were poorly done. The uninhibited, revolutionary manner in which minhwa depicted the tiger is made very clear when we compare it with the more traditional approach employed by Kim Hong Do, one of the Joseon Dynasty's greatest artists, in his Tiger Under the Pine Tree. It is in this freedom of expression and amazingly unconventional method of painting where we see how minhwa so effectively portrayed the hopes and desires of the common people. The minhwa's humorous depictions helped the people overcome their fear of the tiger by giving this sacred being a friendlier demeanor and appearance.

<Tiger Under the Pine Tree, Kim Hong Do, 18th century. In this painting Kim Hong Do depicts the dignity of the tiger in realism.> 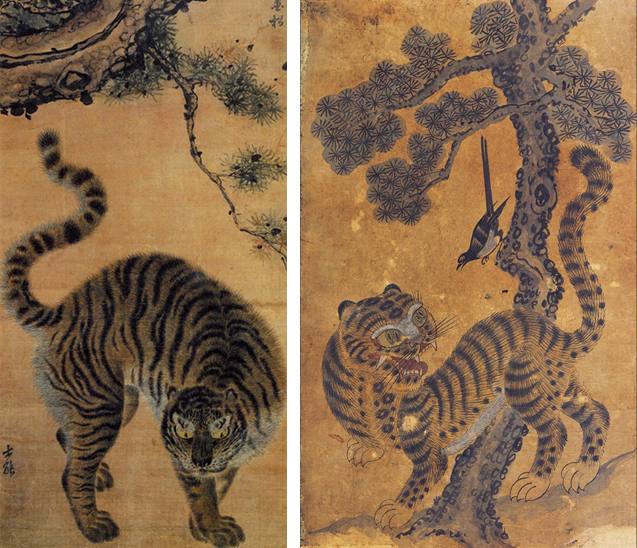 The hope of the people expressed in carefree unconventionality

In essence, minhwa is a genre of art created for the common people. It is the natural outcome of the people's long-cherished desire to live healthy and prosperous lives and beautify their living environment. Encompassing a variety of subjects and methods of expression, minhwa were created through a strong adherence to the symbols and events of the everyday lives of Koreans. As a result, they are heavily invested with a uniquely Korean psyche in terms of both content and philosophy. Although minhwa lack the elegance and refined beauty of traditional Korean paintings of the artistic establishment, their humorous and simple format in addition to their unconventional layout and bold colors are, nevertheless, important characteristics of the Korean aesthetic. 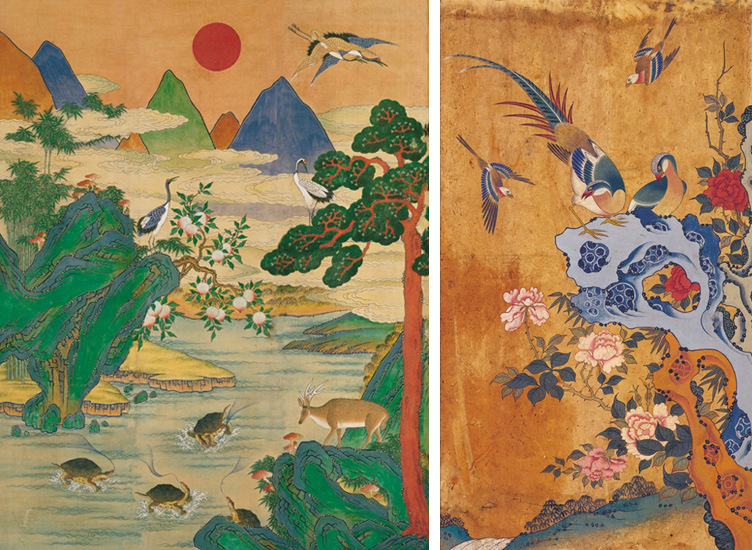 <A minhwa version of the ten longevity symbols, and a minhwa of peonies and an oddly shaped rock.>

Though minhwa are roughly drawn, their strong lines; vivid colors; bold, unconventional layouts; wit, humor, and optimistic spirit; tales of love and exaggeration, and mocking of formality; and free technique expressed in the arrangements of flowers, insects and animals—all combine to create the philosophy of art, and the life force itself, of Koreans. 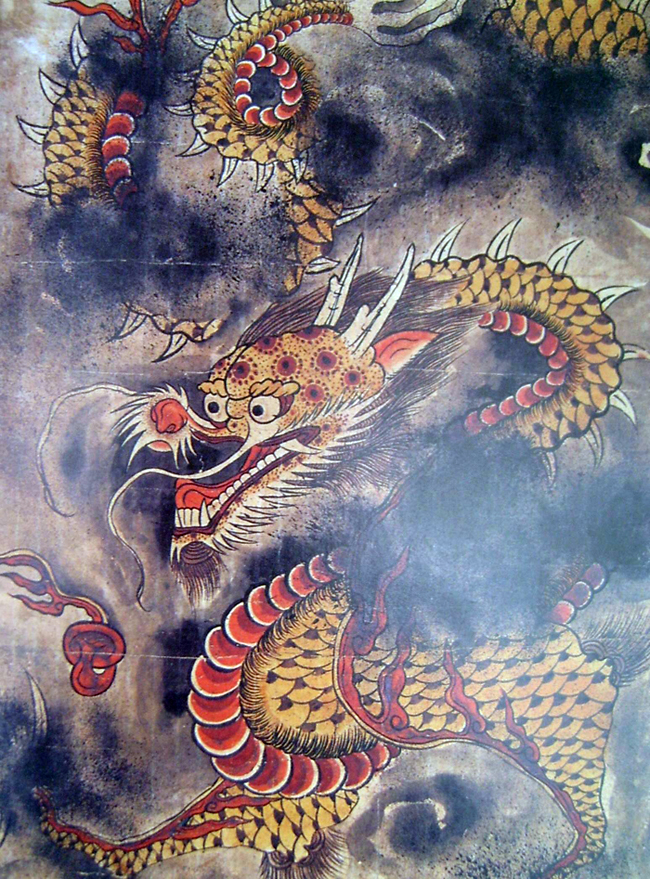 <The dragon of minhwa is a sacred animal that chases away evil spirits and protects people from disaster. It was a familiar and trusted image in the everyday lives of common people.> 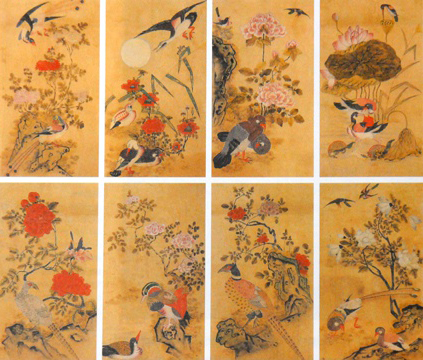 <Images of an eight-panel folding screen. The bird-and-flower painting was the most common and popular minhwa due to its brilliant colors and uniform structure, as well as its usefulness in the home as a decorative piece. Birds are usually depicted as a male and female pair, which symbolizes conjugal harmony or a peaceful home.>

Minhwa, which once occupied a central position in the everyday lives of the common people, can now only be seen in museums and in traditional handicrafts. No one hangs paintings of tigers or the ten longevity symbols in their homes anymore. Does this then mean that the minhwa has completely disappeared? Not at all. Minhwa are reborn in the modern era in images that decorate the sidewalk walls of old neighborhoods, car stickers, mobile phone cases, and school supplies, and can be found in spirit in t-shirts decorated with popular cartoon characters. By definition, minhwa is the artwork of the common people. As long as people exist, so too will minhwa in a way that reflects the changing circumstances, values and culture of a particular era. 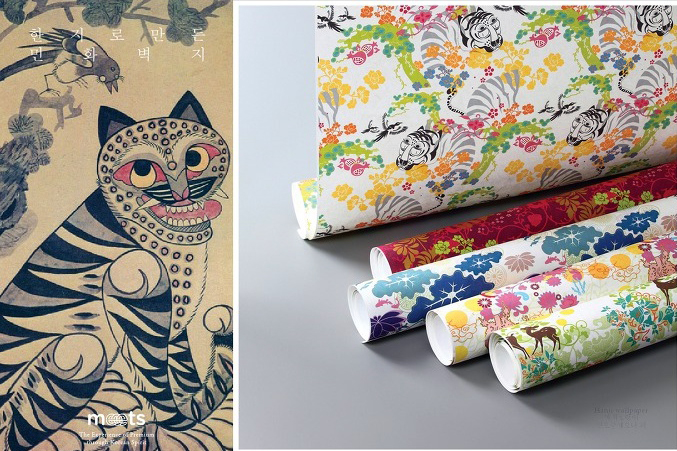 <Wallpaper made out of hanji (traditional Korean paper) with a minhwa tiger design.> 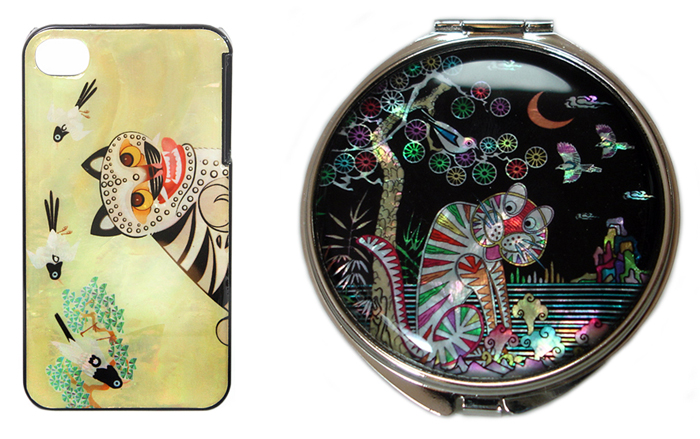 <Minhwa design on a mobile phone case and on compact mirror.>

<Images painted on the walls of an old neighborhood in Dongpirang Village, Tongyeung, contain the spirit of traditional minhwa.>

The folk painting of Korea – the art work of the common people (Minhwa) from bird and flower paintings, to the tiger and the dragon and the ten longevity symbols.