Jangseung – guardians of the Korean people

Jangseung are extraordinary, striking statues that stand as protectors over the Korean people, sheltering them from harm in their villages and on roads far away.

A jangseung or village guardian is a Korean totem pole usually made of wood, sometimes made of stone and bearing some resemblance to the dolhareubangs of Jeju Island. 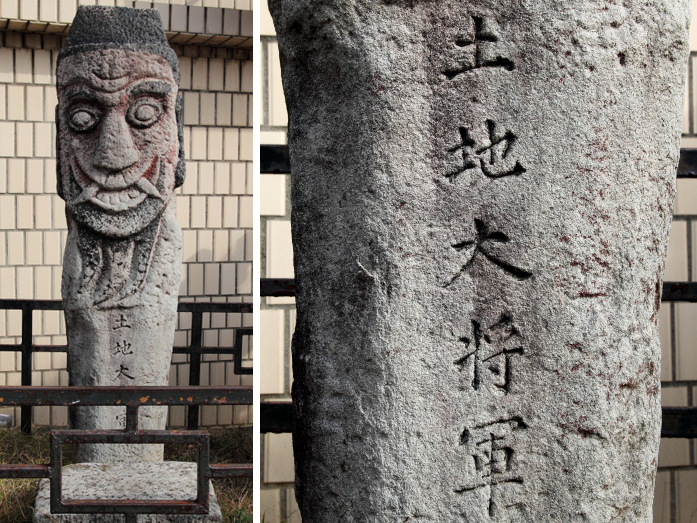 Although they have mostly disappeared from view today, even until just 100 years ago jangseung were erected at the entrance of nearly every village in Korea. Besides greeting visitors, these striking pillars were created to scare away evil spirits that caused famines, natural disasters or epidemics such as small pox. With the passing years, jangseung came to be regarded as objects of folk religion to which villagers prayed for the health of their families, for a baby, or for a wonderful husband or kind-hearted bride. Thus, the resilient jangseung protected the village from harm and also served as a guardian god, with its ears open to the wishes and hopes of villagers. Each year villagers would conduct jangseung rituals, placing offerings of rice cakes and fruit at the foot of their honored guardian. 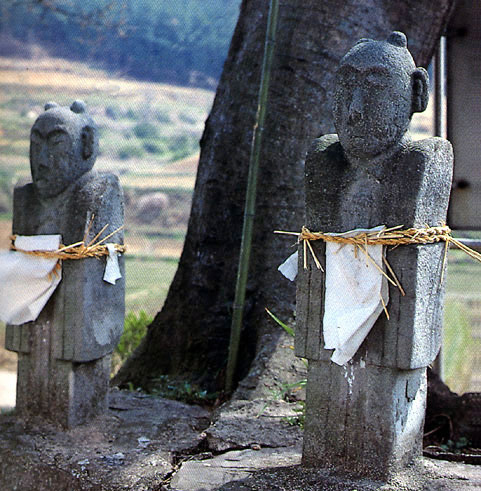 Jangseung were found not only at village entrances but also on frequently traveled roads as markers (usually placed at approximately 4 or 12-kilometer intervals). With not only the names of neighboring villages, the marker's location and the distance from the villages inscribed in the jangseung, these noble guardians functioned as guides and welcome companions of travelers. In the days before the development of public transportation and communications, the sight of these strong, indestructible protectors for a lost traveler could not have been more welcome. As such, jangseung were a vital part of Korean life and culture that need to be preserved and cared for today. 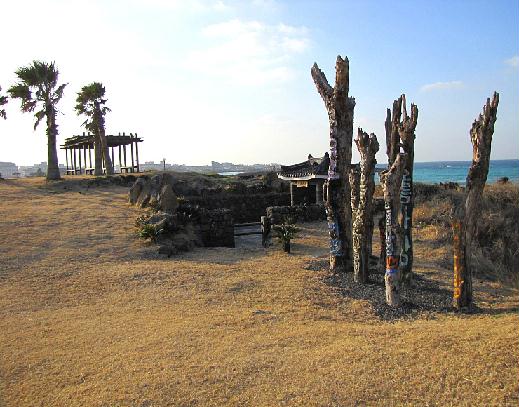 <Wooden jangseung and the shrine devoted to it at Hamdeok, Jejudo.>

Jangseung, a symbol of the people's strong vitality

Jangseung were commonly made out of wood or stone. Jangseung that remain today are mostly male and female figures with their names written on their bodies. They are symbolically expressed as guardian gods through the intentional altering of human facial features. The face is characterized by coarsely-shaped bulging eyes, a fist-like nose, and protruding canines and front teeth; most jangseung statues have a soldier or government official's hat on the head. Through such distortion and exaggeration, the talented jangseung craftsmen depicted a guardian god image, reminiscent of a monster or god from the underworld, while simultaneously offering a kind of portrait of the common people. The first impression of jangseung is that it is both scary and humorous, a dichotomy that seems to have grown out of the artists' attempts to portray folk gods in a more familiar and accessible manner within people's everyday lives. The sagging and benevolent faces of the grandfather and grandmother jangseung in Dangsan, Buan, and the toothless, wrinkled smile of the grandmother jangseung and the long braided whiskers of the grandfather jangseung at Bulhoesa Temple in Naju are reflections of the friendly yet satirical characters of the common people at that time. 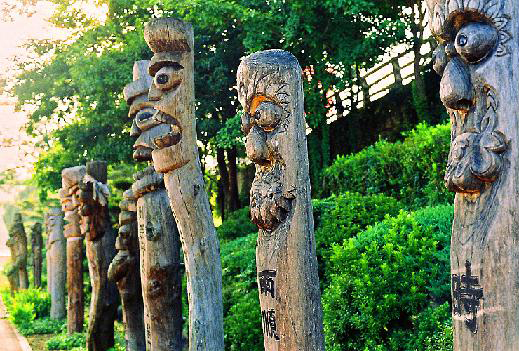 <A group of wooden jangseung along the banks of the Namgang River in Jinju.>

Most wooden jangseung rotted away with the passing years, but many stone jangseung have been almost perfectly preserved in their original forms. These striking stone jangseung accurately show the aesthetic values of their day. Stern despite their smiles, but nevertheless beautiful, they seem to express the confidence of the common people. The freely-formed faces of jangseung, in essence, reflect the many faces of Koreans today. Their attire accurately depicts the Korean commoner class. Jangseung, which stood proud and strong at the entrances of villages despite their vulnerability to the elements, not only relieved the loneliness of passing travelers and protected villages from disease and disaster, but stood as reminders of the warmth of the Korean people, who remained upbeat and optimistic even in the face of very difficult conditions. The Song of Byeongangsoe tells the story of a man who used jangseung for kindling wood and was killed by the gods in retribution—showing the enduring belief of the jangseung's strength and vitality, and by extension of the Korean people themselves. 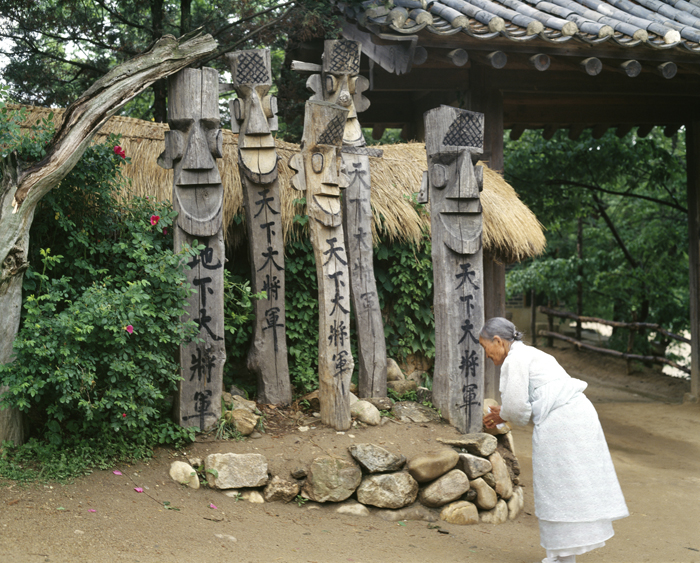 <An elderly woman prays to the guardian jangseung.> 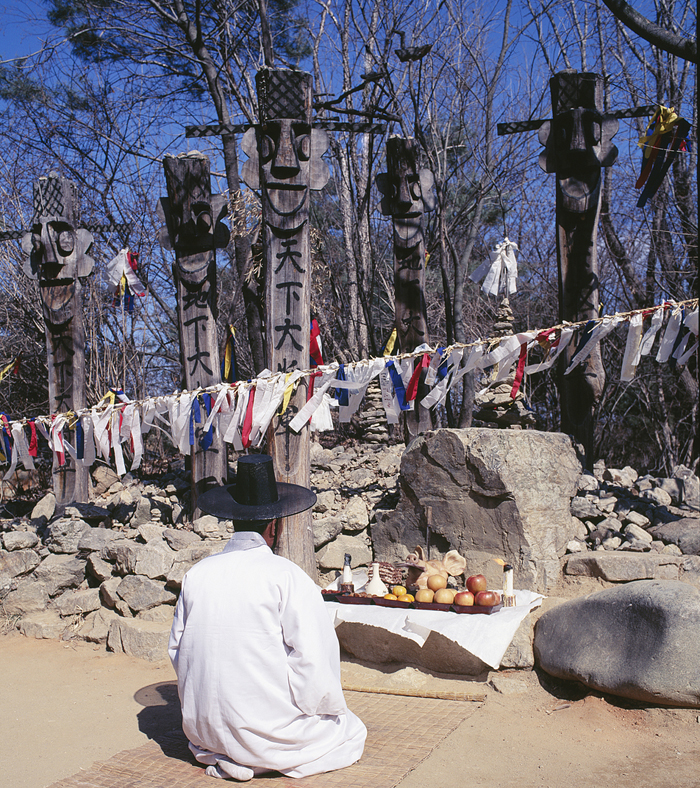 <A jangseung ceremony during which people pray for peace and the well-being of their village.>

A jangseung or village guardian is a Korean totem pole usually made of wood, sometimes made of stone and bearing some resemblance to the dolhareubangs of Jeju Island.